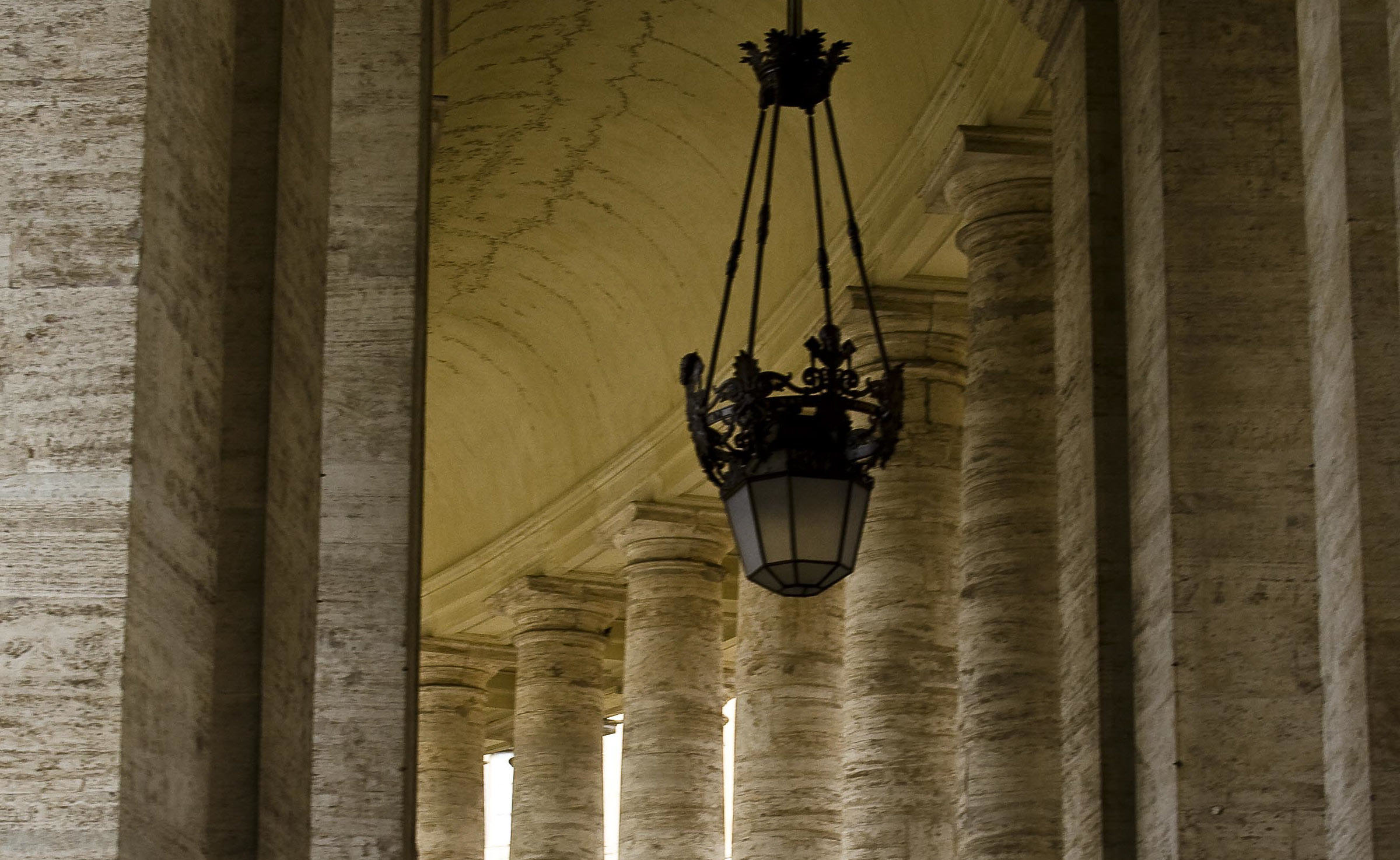 The Passage Between the Columns at the Vatican, by JC Johnson

This week’s writer illustrates the power of art for guiding us to new places. For her, two paintings in a Vatican gallery thrust her into a spiritually profound encounter.

These, the “Pope’s paintings,” cried out to God more than any others as we wound through masterpieces in the sad, vast Vatican.

We were plodding through the quarters and it was less crowded than the other museums, as it was not on the path to the Sistine Chapel.

I started to tremble when we saw a Raphael, his last before death. A secrecy pervaded the image, forcing me to a craggy edge of longing at which my eyes watered.

In Raphael’s Transfiguration , below the ascending Jesus, is a boy who was demon possessed. Beside him is a kneeling woman. Like a pearl in a row of obsidian, this woman stood out among the dark tumbling figures. “Is that Magdalena?” I asked the guide. “It is not known,” he answered. Which made sense. Unlike the pearly lady before me, Magdalena is not so mysterious. Rather, Magdalena proclaims her great neediness. This lady was mythic and involved in some secret plot or other assigned to her from on high.

We kept moving but I remained occupied by the identity of the lady and the misery of the boy.

Until we came to a painting by the murderer and miscreant known as Caravaggio.

There, before Caravaggio’s Deposition from the Cross, I lost myself. I was pushed from the edge Raphael had me set upon and I fell, head first. I turned away to shield myself from the great emotion. Hiding my face in my hands, hiding my ongoing struggle with the ineffable, I cried. The tears were spirit tears, so: inconsolable. Tears from your spirit flow unconscionably.

The tour guide was speaking still, so I tried to obstruct my spirit tears which, whether done for propriety or survival, means an untimely cutting off of a release. Snot-faced, I stumbled on around the marble rotunda in regret. I would never have the chance of this encounter again, and I wished I could take the painting away somewhere and weep till the tears abated on their own. Only then could I exorcise whatever note of pain it strummed, being indelibly strung inside me.

The women in the painting captured me first: each expressed a different posture in the face of her disconsolate loss. As though they had been walking around all their lives with their hearts poised to break and it had finally happened.

Mary Mother—resigned and openhanded with inner surrender to a faith that believes God knows better; sadness as an acceptance of seeing and knowing only in part, reflecting the Bible’s words in 1 Corinthians 13:12.

Mary Magdalene—the grief has done the work of internalizing itself within her and will turn into a kind of hopeless listlessness; sadness as a lifeless weight.

Then Mary of Copa—looking absurdity in the eye with her newly severed heart; sadness as a hysteria of despair.

They are immediately recognizable, each state of suffering, I mean. The articles I later I looked up all mentioned these three different expressions of grief, so either I have a fast eye or I have a broken heart.

The scholars call it descent: as the eye travels from the gloom in the top left of the painting, it flows down a cascade of mourners. The transition from the hysteria of Copa to the emotional silencing of the Virgin represents an evolution of sorrow in successive states, the academics say.

But I saw all the bodies in the painting as connected in one corporeal mass with the lifeless Christ. This composition of coalescence gives way to another reading: the way I see it, while they may cascade or flow down, the different phases of suffering also happen at the same time all the time, unfolding into each other. This is why the women are nearly indistinguishable from a whole; they move in one melded mass. They are felt all at once.

But more than this, my pain—I think it was that I could not bear the humanity of Nicodemus and John struggling with a weight too heavy to hold but essential to carry. And while they try not to drop a dead man, scrape him on the edged tomb, or let him fall into the blackness, they are holding one they love and simultaneously holding all doubt. What their souls believed and what their eyes now perceive has completely broken in the moment of their deepest sorrow.

But they do not have time for this sorrow, because they must carry a body. Doubtless I felt the depth of this expression.  Caravaggio, not giving me warning or choice, thrust me into the scene like so, mid-lowering a savior unto death.

But what is the expression on St. John’s face? Maybe he thinks: “I thought he would set beauty free from transience, but now he himself is dead.” Or, “I saw the answer in you, Word made flesh, now loss of all love, here in my arms, vanquished in death.” I can’t know.

The tour guide spoke again, “Will you join us in the hall?”

I walked out of the gallery arrested by the solitude of statues, the coolness of the chapels, and the holiness among the traffic.

2 thoughts on “Two Paintings and an Encounter”