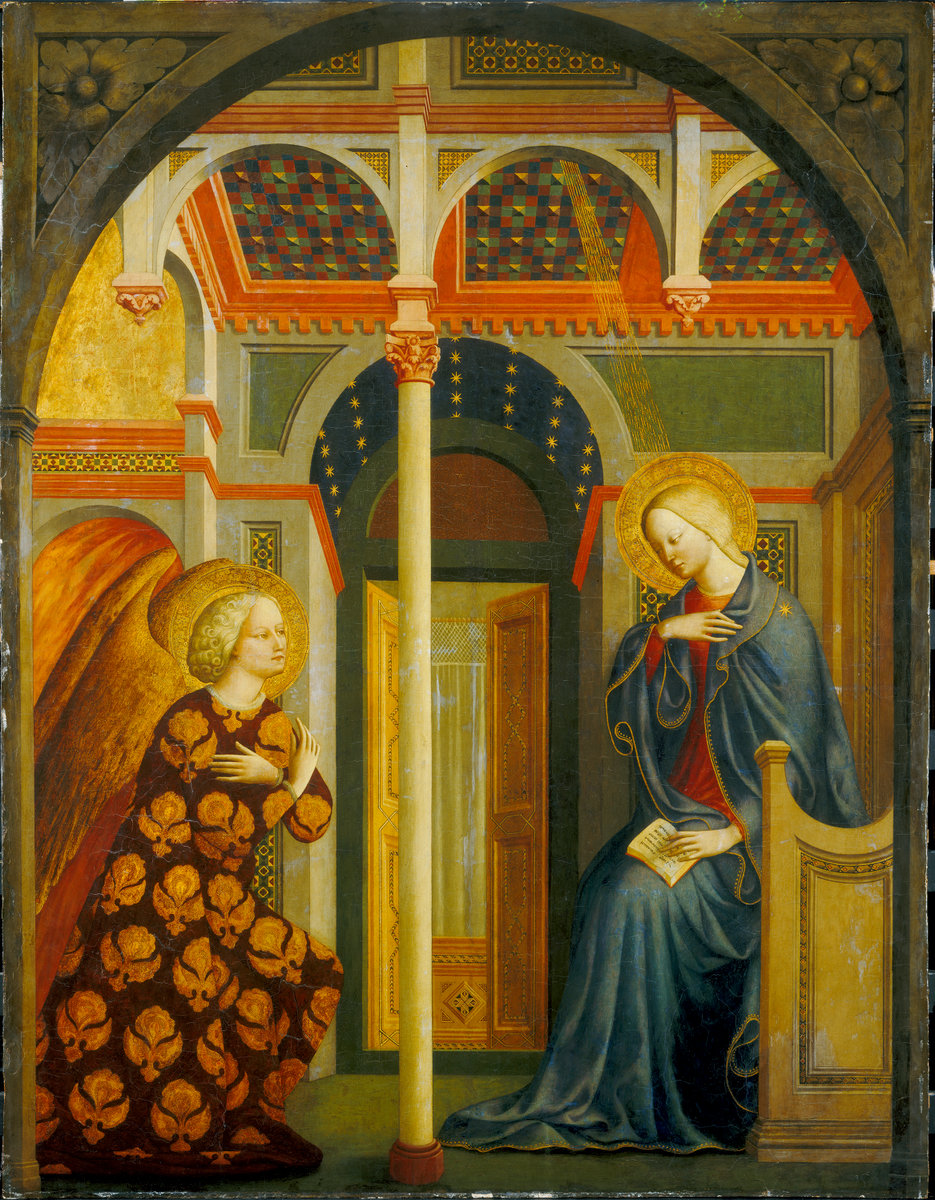 In a holiday season full of the wonder of childhood delight mixed with the hopes and burdens of adults, our contributor Jane Potthast stumbles upon a favorite painting from childhood and wonders whether it holds something new for her now.

I met a young student of mine at the National Gallery of Art in Washington, D.C. She had long wanted to see some of the works by Degas there, and I intended to show her four major paintings, starting with a Botticelli, da Vinci, and Rembrandt, before ending with the famous ballerinas she sought. Thinking I was walking into the Renaissance galleries, I led her on accident into a Late Gothic room.

One painting caught my eye. It did not give me the emotional whiplash that some paintings elicit, where the feeling jumps out of the canvas and assails me. Rather, I noticed it with a soft curiosity.

That’s the painting I loved when I was little. I had not seen it in a long time. After the lesson, I returned to contemplate it, this time as an adult.

When I was a child my teacher put copies of medieval paintings around the classroom during Advent, the three- to four-week season of preparation in the Christian church year for Christmas. Then on the last day of school before Christmas break, we would go to the gallery to look at the pieces in person.

I loved this Anunciation like I loved a doll house. With its starry ceiling and gold light, I assumed this fairy room was part of an enchanted castle where Mary lives. The allure of the half-open doors, invited me into a world beyond, the world of the painting. Gabriel is dressed for a ball, and the Virgin has the grace of a princess about to try on a glass slipper. It’s like a scene out of Cinderella, but better, deeper, more radiant.

I remember also that we were told the Virgin was poor and lowly, yet in every classroom depiction of the annunciation she was in some beautiful hall, draped in silken blue. Though this crossed my mind as strange, I never bothered to ask why. To a child, the two are not contradictory. Of course Mary is poor and rich. She is also virgin and pregnant. She is from the Bible but here she’s a princess. None of these matter. I love her because she is pretty in her starry hall with the angel friend—this was the extent of my child-mind’s reasoning.

Looking on Masolino’s Annuciation now, I hoped the painting would say something new.

It did still captivate me. But I wanted more than this. I wanted some emotional explanation to jump out and give me a reason for staring, for being transfixed by its straightforward scenery.

So I sat there waiting on it.

In the simple pleasure of looking at its beauty, I sank into a blank peace. And I thought I was failing to uncover any distinct meaning that might evolve into understanding.

I could recognize that the pillar separating Gabriel and Mary creates a spatial dichotomy that separates the two. This pillar is meant to draw attention to a duality between God and man that is coming to an end. In Renaissance art Mary’s hands reveal a distinct stage of Mary’s thoughts: hand over heart is the Mary who contemplates.

But this knowledge was not what I wanted. What is Mary really doing?

I waited before this painting full of demands—that is, I expected the painting to give me something. To make me feel like a child again, maybe? To give me some experience that would cut through the ordinary of my day?

My waiting is entangled in wishes. Wishes are demands on the uncertain future.

But actually, I was looking at exactly what I was looking for: a moment of ordinary waiting transformed, pierced through with the divine. In this painting was Madonna, full not of wishing but of gracious hope. As the story goes, she was just some girl, faithfully minding the mundane. But then an ordinary moment became colored with gold; humility and glory meet together in a lowly girl’s home.

Her humble house really was a palace, then, because in this story God did not give Mary a wish. Rather, God gave her himself.