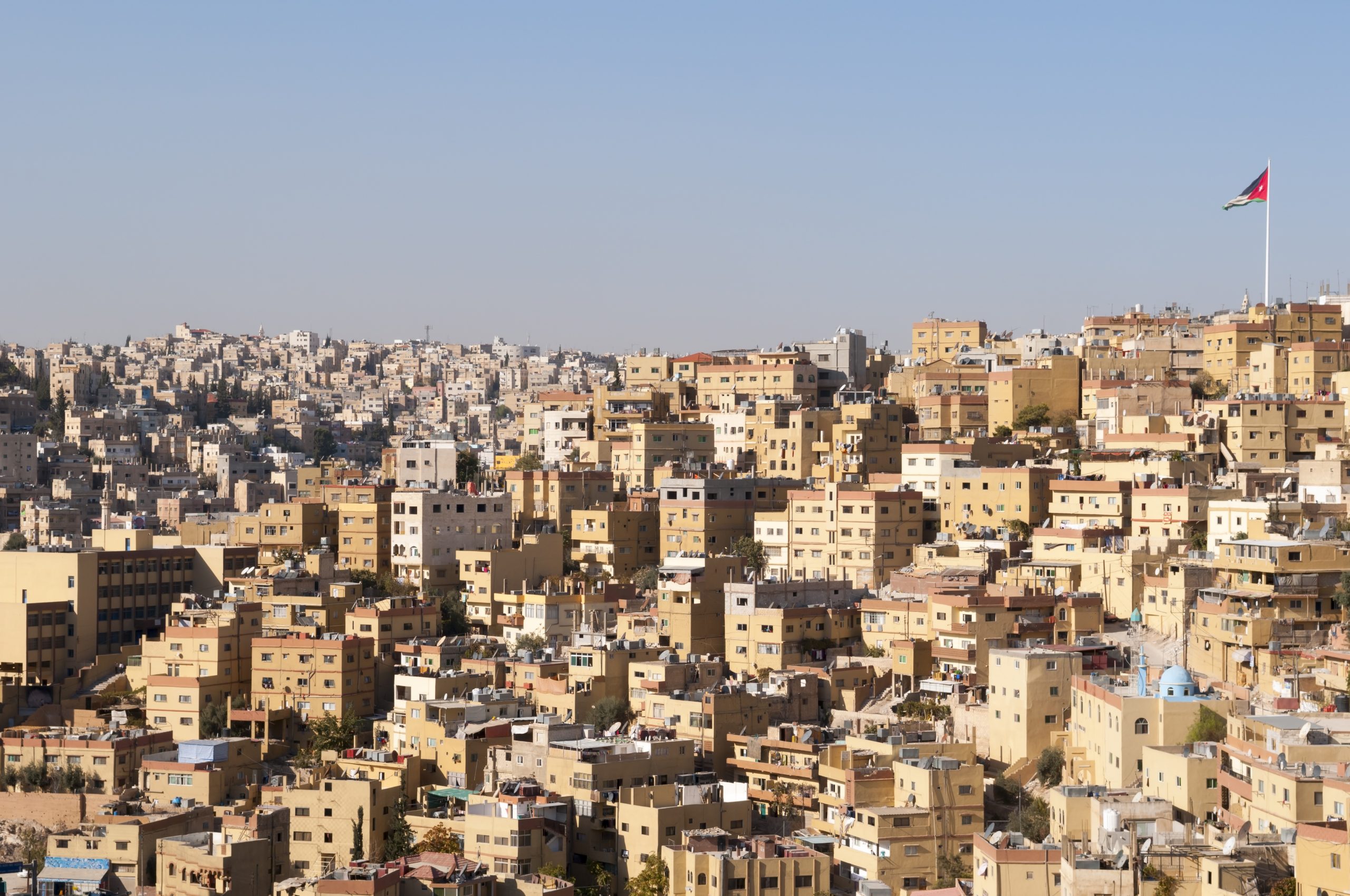 Photo above by Joel Carillet. Illustrations below by Montana Johnson

Who are the characters who would give life to a story about your neighborhood? Here, Heather Surls answers that question about her own neighborhood by introducing us to those who inhabit its daily comings and goings in Amman, Jordan.

One of the Jordanian proverbs says, Il-jaar gabil id-daar. Which essentially means: Choose your neighbors well. The day our landlord broke down our Lebanese neighbors’ front door, we knew we had chosen well. A burly, bald man whose typical garb was a wife-beater and basketball shorts, Abu Ra’ed (Abu means “father of”) had seen smoke trickling out of their glassed-in veranda. Fearing for their lives, he ran across the street, banged on the door, and shouted their names. When no one answered, Abu Ra’ed smashed through the glass to rescue them. Only later did he learn that the “smoke” was from a mosquito bomb, and that the elderly couple was sitting next door drinking tea with a friend.

Of course no one can know all their neighbors before choosing a place to live. But Arabs have ways of knowing quite a lot. They ply each other with questions and exchange neighborhood gossip like candy. They spy from second-story windows and peer over walls and watch each other from behind their newspapers and phones. When I first visited the local women’s salon, a stand-alone garage with a sliding door, Rashida welcomed me with a flashing smile. “I live across the street,” I told her, thinking this was an appropriate introduction. “I know,” she said.
“I’ve seen you.”

Fearing for their lives, he ran across the street, banged on the door, and shouted their names.

Hands down, Um Mohammad (Um means “mother of”) is the best spy on our street. Nearly crippled by age and diabetes, she spends most of her days on her porch, watching people come and go as she smokes cigarettes and hulls zucchini and forms tiny dumplings to cook in yogurt sauce. She waves to us so often that we feel obligated to stop in occasionally, and I always feel self-conscious when we do: crossing the room to kiss the cheeks of this matriarch in a house dress, I hope I’ve greeted her properly and that she’s glad to call me neighbor.

The Hadith—“a record of the traditions or sayings of the Prophet Muhammad” (as described by Encyclopedia Britannica)—says that Muslims are responsible for their neighbors. There is debate, though, over whether “neighbor” means just those living beside you, or the people up to seven buildings down, or even all those who pray with you in the mosque.

Perhaps this exhortation is why Mahran invites us to visit every time we see him. We do live in the same building, after all, and foreigners like us need looking after. So he feels compelled to say, “T’aaloo, zuroona!” (“Come, visit us!”), whenever we see him. He is usually coming home from work at these times, and sometimes he tells us to visit even as he is pushing the elevator button and we can see that all he really wants to do is collapse on the couch and watch TV, inshallah. Being good neighbors, we thank him and release him to his rest with an Arabic blessing.

I hope I’ve greeted her properly and that she’s glad to call me neighbor.

We have neighbors that we visit time and time again, who accept us without questions, without needing to know why we’ve moved here or how much rent we pay or if we work for the U.S. government. Neighbors like Um Maryam, the elderly woman across the hallway, who has opened her door to me every time I’ve knocked, even when my Arabic was poor and her legs so weak that she had to cling to the countertop as she pulled down the bakraj, filled tiny cups with water, and brewed coffee for us. She never asks why I’ve come, for she wants me to visit and I need
her too.

Another neighbor, Deenah, an Iraqi refugee, once told me she needed help reading some paperwork and instead greeted me with a full-sized chocolate and banana birthday cake, which we ate while wrangling her toddler away from the gas heater.

Another time, after customary drinks and snacks, Um Jude, a soft-spoken Syrian living across the street, pulled me into her room and sat me on the bed to show me her wedding photos, pictures of the husband she’s not seen in four years.

And when I misunderstood a text, Um Zeina, whom I first met on the sidewalk, sent me a bajillion smiling emoticons and said,
“I love you!”

She never asks why I’ve come, for she wants me to visit and I need her too.

One day I sat on the sidewalk outside our building, watching my son play with the neighborhood kids. I held my notebook, trying to learn a few vocabulary words while I passed the time during those dead hours of late afternoon when it’s hot and still. Um Husam came out of her apartment with a tray in her hands. “I made you coffee,” she said. “T’aali, come.” She opened the gate, wiped off two plastic chairs, and brought me behind the lattice on her porch, as though she were heeding the words of an ancient nomad: “Enlarge the place of your tent, stretch your tent curtains wide, and do not hold back.”

And while the kids ran and the muezzin chanted the afternoon call to prayer, she told me stories of oak trees and her Palestinian grandparents while our coffee cups warmed our already
sweaty hands.