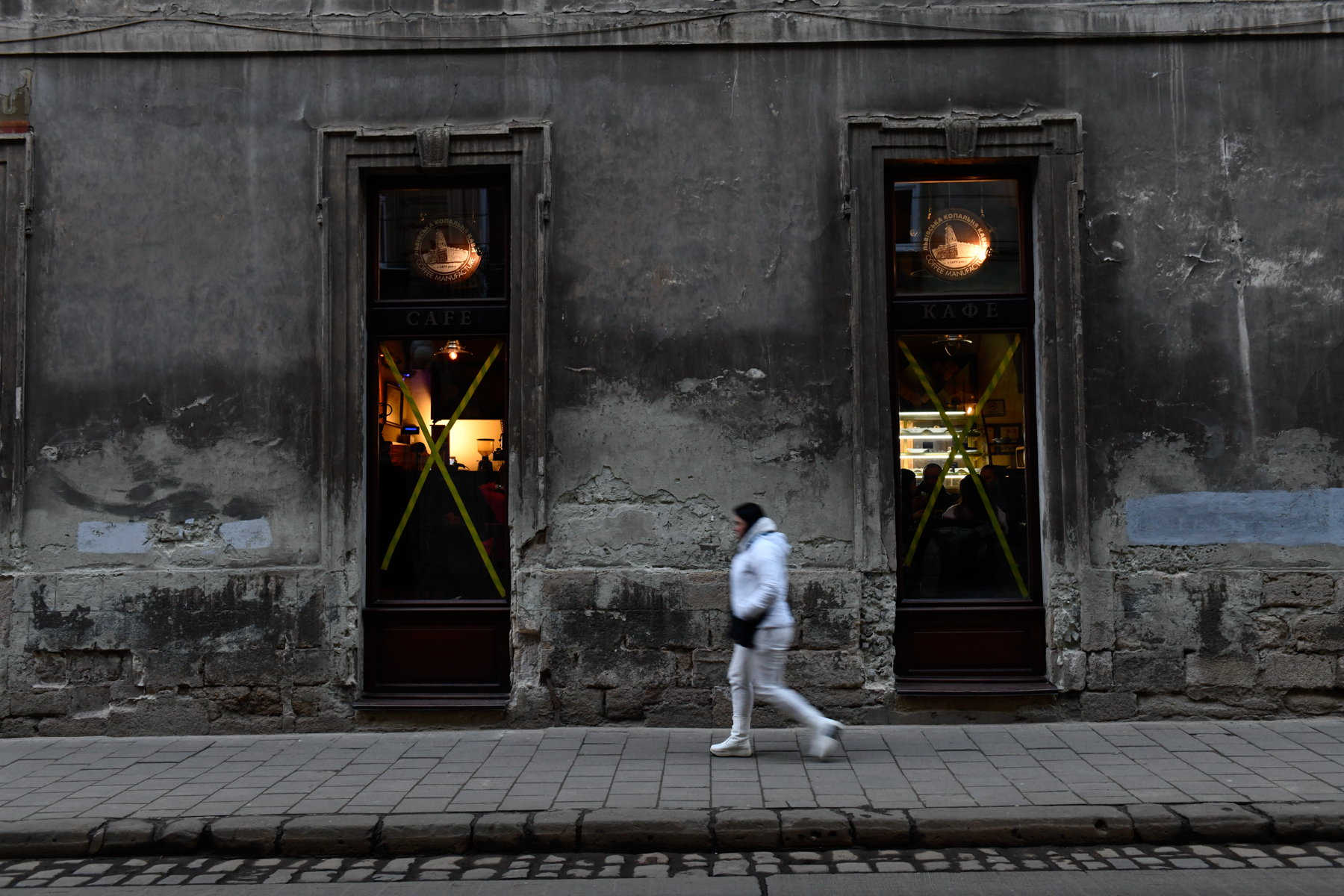 Lviv, Ukraine – March 3, 2022: The windows of a cafe are taped to provide a small layer of protection in the event of a Russian strike on the city.

Hours after Russia’s invasion of Ukraine began on February 24, Douglas Webber, emeritus professor of political science and a Europe specialist at the prestigious business school INSEAD, framed the conflict starkly.

“It’s really a decisive turning point we’re looking at here, and for me certainly I think that it’s the most dangerous moment in international politics if not since the end of World War II, at least since the Cuban Missile Crisis in 1962,” said Webber to an online meeting of the Anglo-American Press Association of Paris.

Now late in the war’s second week, Russian missiles rain down on Ukrainian civilians caught most directly in that dangerous moment. In their rush to support them, world citizens captivated by Ukrainians’ courage and distress have posted social media testimonies of endeared exchanges with the people of Europe’s second-largest country by area.

Twenty years ago, Joanna Marsh was part of an American church group invited to partner with some of Ukraine’s Christian leaders who had gained newfound freedom to develop ministries, thanks to the recent dissolution of the Soviet Union, whose republics had included Ukraine. That year the American group was asked to mentor university students in job skills, including in journalism. Marsh had just earned her journalism master’s degree.

During the weeklong trip, she enjoyed time with four young women who became her friends. She taught them about the inverted pyramid form for news articles, and they haggled for souvenirs on her behalf in downtown Kyiv. They took her to a museum exhibit on Chernobyl where she learned about a Ukrainian pilot who spent his last hours drinking before he died from radiation exposure.

“The skies were very blue, as my Russian-American college roommate said they would be in that part of the world,” Marsh remembers. “We went to someone’s apartment, and they recited poetry to us from memory. We Americans felt embarrassed because we didn’t know any poetry to recite back.”

Vladimir Putin claims a mission of “denazifying” Ukraine and refuses to back down from bombarding a country whose citizens recite poetry and whose President Volodymyr Zelenskyy is Jewish. Webber said the conflict is an existential issue, a matter of regime survival, for Russia’s president. “Sanctions will not, no matter how comprehensive they are, they won’t sway him at all.”

“The security of Europe is jeopardized as of this day,” said Marie Mendras, Russian specialist at the esteemed Sciences Po Paris, speaking to journalists in the same February 24 AAPA meeting.

However, Mendras says she is “much more positive than many American or English colleagues about the capacity of the EU. I think the EU is strong economically, politically, legally, culturally.” It’s these strengths—human security, institutional security—that make real security today, she says.

While Ukraine is not an EU member, the EU is implicated in its European neighbor’s security situation. In recent years Ukraine has sought to align itself more closely with Europe than with Russia. On February 28, Ukraine officially submitted its application to join the EU, followed by a March 1 speech by Zelenskyy to the European Parliament. The path to EU membership typically takes years to complete.

In contrast to the EU’s approach, Mendras says Putin and other dictators operate under an opposing definition of security, one that depends on regimes and military forces. They don’t care about individual citizens, international neighbors, or prosperity. Protecting the regime is critical to security.

“What we are living now, and I think it’s really interesting for all of us, is that it is a struggle between two opposite conceptions of human organizations, of societies, of qualities, and two completely opposed conceptions of what states are there for.”

These competing conceptions help explain Putin’s surprise that the EU managed to unite on sanctions against his country. Said INSEAD’s Webber, “This crisis has had a tremendous rejuvenating and uniting effect both on the EU and NATO.”

Putin’s war on Ukraine has even united entrenched domestic foes. During US President Joe Biden’s first State of the Union address, on March 1, Biden’s comments about US and NATO support for Ukraine pulled members of both US political parties to their feet with supportive applause, an all-too-rare bipartisan moment in the deeply divided Congress.

Also united are Christians around the world, with multilingual calls to in-person and physically distant prayer circulating among the world’s Christians. Pope Francis and the Archbishops of Canterbury and York called for March 2—Ash Wednesday, the beginning of the Christian penitential season of Lent that leads to Easter—to be a day of prayer and fasting for peace.

Despite the widely revered resolve, bravery, and determination of Ukrainians and their leaders, given the dire prognostications by many experts, even sympathetic ones, it will take something akin to intervention by a higher power to quash Russia’s deranged onslaught on Ukraine.

Joel Carillet is a Tennessee-based photographer and writer who spends about half of each year overseas, chronicling places and people in a variety of circumstances, from beach parties in Thailand to the migrant crisis in the Greek islands.