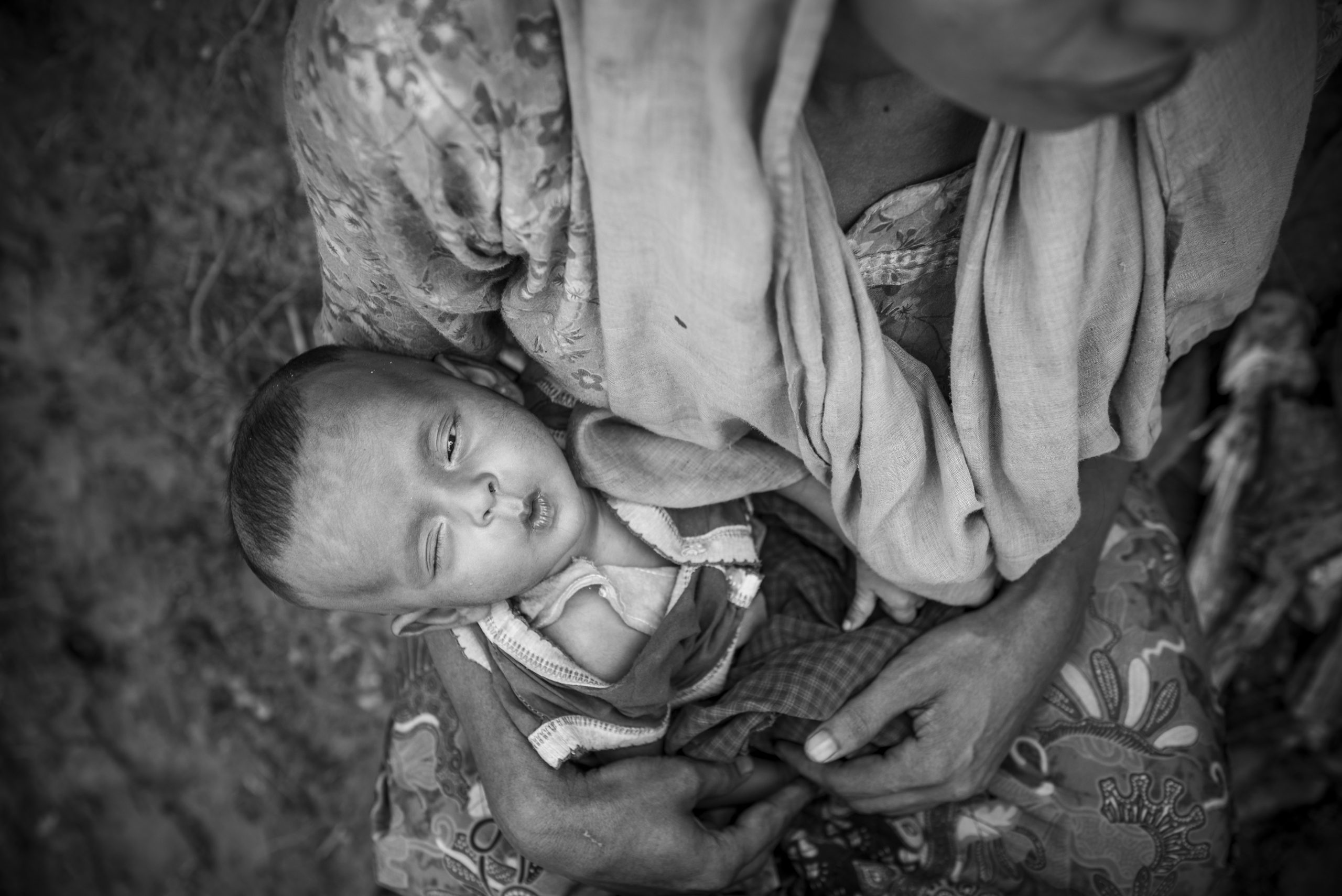 Boshara, age 2 months, in the arms of her mother at Jamtoli refugee camp in Bangladesh (October 26, 2017).

STORY AND PHOTOS BY JOEL CARILLET

With this article from Joel Carillet, we wrap up a four-article series from contributors who have entered in various ways into the lives of the Rohingya people who have sought refuge in Bangladesh. In the height of their crisis last fall, Joel spent time photographing and listening to people living in several refugee camps in Bangladesh, specifically Jamtoli, Kutupalong, Shamlapur, Chakmarkul, and Balukhali. He shares with us one of the questions that has persisted for him since then.

This Editor’s Note helps guide you through our complete four-part series.

There is a song I like called “What Child Is This?” that is set to the hauntingly beautiful tune of “Greensleeves.” It’s a classic Christmas song, but one which I’m inclined to hum to myself at any time of year. The song is about Jesus, newborn and sleeping on Mary’s lap, but as I look at the picture above, of Boshara resting in her mother’s lap in the scorching heat of a refugee camp in a distant corner of Bangladesh, the song’s opening question — What child is this? — is recast.

What child is this? This is Boshara, age two months, daughter of 31-year-old Halayda. They are a Rohingya Muslim family who recently fled government-sanctioned violence in Myanmar (also known as Burma). Many organizations, like Human Rights Watch, describe the violence as ethnic cleansing.

At the start of 2017, around one million Rohingyas lived in Myanmar, specifically in Rakhine State, but in a two-month period beginning on August 25, 2017, more than 600,000 fled to refugee camps in Bangladesh. Most were children, and an estimated one out of five was acutely malnourished.

What child is this? Like Jesus, Boshara was born in a global backwater, far from the world’s power centers—the kind of place easy to overlook, even belittle, when you live in an influential place like Rome was in Jesus’s time. But whereas the parents of Jesus are said to have gone to Bethlehem to participate in a Roman census, the government of Myanmar excluded Boshara’s parents and all others who call themselves Rohingya from its 2014 census. Though the Rohingya have lived in Myanmar for generations, they are not considered citizens by the government, rendering them stateless.

It’s a vulnerable position to be in, even in the best of times, even before you flee for your lives to Bangladesh.

What child is this? This is a child whose community knows that stories of shocking cruelty didn’t stop with Herod, king of Judea, so long ago. After the birth of Jesus, King Herod is said to have ordered the execution of children in order to protect his own power. In A.D. 2017, Rohingya infants have been pulled from their mothers and tossed into fire. Men have been executed. Women have been raped, and then executed.

The primal quest for survival that animated the flight of Jesus’s parents, Mary and Joseph, to Egypt has also driven Boshara’s family, and all the people pictured in these images, to Bangladesh.

Turning the question What child is this? over in one’s head, a second, related question emerges: What am I? By this I mean: What am I in relation to this child, to events that happen on the far side of the world?

Part of the answer, of course, is that I am a neighbor. But what does this mean?

It’s a question I continue to consider as Rohingya children struggle in the tarp-field camps spread out on Bangladesh’s hillsides.

·   The Misunderstood Roots of Burma’s Rohingya Crisis (The Atlantic, September 25, 2017)

Joel Carillet is a Tennessee-based photographer and writer who spends about half of each year overseas, chronicling places and people in a variety of circumstances, from beach parties in Thailand to the migrant crisis in the Greek islands. In late 2016 his work was shown in a photo exhibition called “And Who Is My Neighbor?” His work can also be found on his blog and on Instagram.