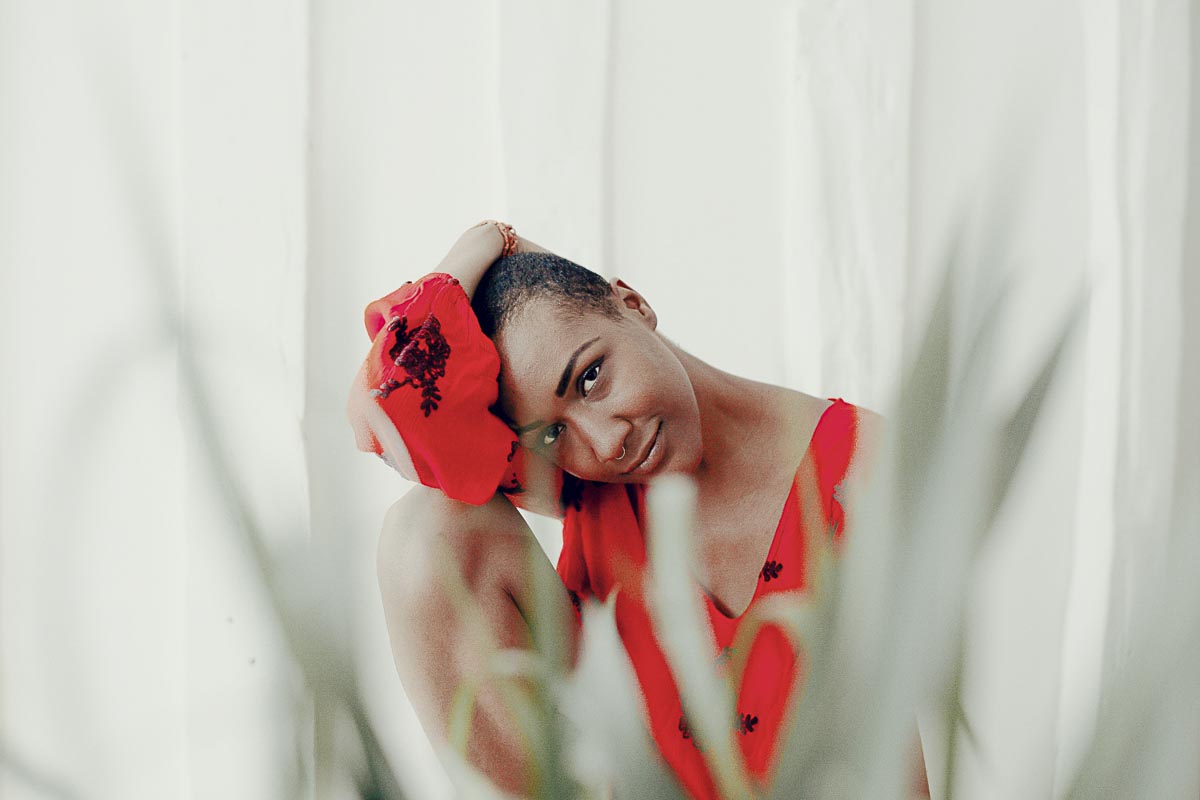 Continuing from the photo shoot we posted last week, this week we hope you’ll enjoy an interview with dancer, writer, choreographer Weléla.

A conversation with Weléla Mar Kindred is a dance of kindness, openness, fierce intellect, and subtle movement. It was an honor for me to spend an hour getting to know such a rare soul. Weléla was born in Southern California but identifies strongly as a member of the Muskogee (Creek) Nation as well as of the Federal Republic of Nigeria. When we talked, Weléla described the difficulty she found in her inability to speak either Muskogean or a Nigerian language and the freedom she found in using the universal language of dance to communicate. Freedom is a strong thread winding through Weléla’s movements and her identity as a dancer.

WELÉLA ON WHAT SHE FEELS WHEN SHE’S DANCING

“Freedom. Complete freedom. Ultimate freedom from my ancestors to the present to the unborn. You feel like you can fly. You feel so free that you get lost, and it’s scary before you do it. There’s this apprehension before you dance: I don’t know if I should do this, in your mind, even if you’re dancing alone. Even if you’re dancing at a club . . . Once we go through it, there’s this sense of faith and hope, and after you’re done . . . you feel good. But when you [dance] professionally, there’s a burden because you feel the stress of being perfect. Sharing your work with the world is great, but as any creator knows, it’s like, ‘oh god, is this good enough?’ But when you’re in it, when you’re creating a new work and things start coming together . . . once you start seeing that pattern for the day, because god forbid you start thinking ahead, then you’re like ‘oh, hey, that’s a confirmation that things are moving in the right direction.’ So you feel this sense of complete freedom. It’s great.”

“I just started moving really young to music; I didn’t know why; I just did. And then I started coordinating different performances. Just kind of pulling my brother into shows, and my mom and I would do shows, and I choreographed a piece, I must have been six, and it was Stevie Wonder ‘Ribbons in the Sky,’ a ballet-modern piece. From there . . . I started taking dance classes . . . I also loved Shakespeare and read Romeo and Juliet in second grade, and even though I didn’t understand all of the words, I got a sense of the poetry . . . and from there I became a lover of text. I always said that I would be a writer and

“I’m really into the idea of skin and body movement and body politics. And not sure what that means sometimes, myself, but I love the idea of the fact that dancers don’t speak. A lot of times people may think we’re irrelevant or unintelligent, but there are so many important things that we talk about with our movement that I continue to read and to research and to find places in our society where there’s conflict.

“And I’m interested in mothers and fathers, and the past and present . . . for example maybe police brutality in the brown body. Why are there masses of black and brown bodies placed on the ground with a white authority male with a weapon—that choreography has been done so much that it’s almost innate in both bodies. And I’m curious, a lot of the work that’s still in me that I haven’t seen be about expressing what that feels like in a black body in a theater audience.

“[Body politics] comes from art history, it comes from an artist in Chicago . . . My idea of it from a dancer’s point of view, whose work is political, it’s about why is a brown or black body treated as such in modern society, and it’s not spoken of in a body political way, it’s only spoken of in a violent perspective. I think it’s important to have these conversations, and I think body politics is kind of a topic for me that I’m exploring, and I think I’ll always explore it throughout my lifetime as a dancer and as a choreographer because it changes as you change.

“So when I was in Paris, I was affected heavily by the shootings [in the U.S.], and I wasn’t on the soil, and when I came to the soil in the spring, I was hearing about local shootings and national shootings and just seeing how people move in society, seeing the choreography of blacks and whites just cohabitating. My body politics changed, I was thinking more in terms of ‘well, we as African-Americans were Americans even before America was America, so the body politics are a bit reversed. We’re treated like we are trespassers, and if we choreograph that in a dance, if you have a mass of brown or black bodies and you have a mass of white bodies in a space, later on the politics begin, because I believe that politics are about negotiating a relationship. Your words come into play, but honestly it’s about the body as well.

“For the masses of black and brown bodies to then be put into slavery is body political because then you’re submitted to things that you can’t move, you can’t do anything. And so, fast forward to now, body politics where people feel they’re free. To me, body politics is about expressing where body can speak and text isn’t necessary. If we can just watch the L.A. riots without the commentary, if we put it on mute . . . it’s really interesting to see how bodies are reacting. And if you do that same [thing] with any riot, you’ll just see how bodies move in and out, and you’ll start to see how the body does have this language that is quite strong. It can be intimidating and powerful.

“So even though there aren’t any words, people move according to their emotions and what they’re sensing, and I think we need to change it. And I think it’s changing: I think the black body is starting to let other bodies know that they’re not happy with this authoritative conversation with their body anymore and [that] there needs to be some protection instead of killing. So it will be interesting to see what happens in the next few years.”

“I never had a problem with racism because I grew up in Southern California, and it’s not blatant—it’s not blatant—there is racism—you experience it in class as an economic thing, and you really start to sense it as an adult through neighborhood lines and the size of the classroom. If you look back now, you say, ‘oh ok, alright,’ but as far as . . . being the only black girl, for me, it was a bit different. I was with a dance company, a ballet company who was a diverse company, that was their whole mission, so voilà, I was given this great opportunity to work with a multicultural company. They thrived on black ballerinas, they thrived on Latina ballerinas, and that’s where I got my ballet training.”

In college, dance took a backseat for Weléla while she was “distracted” by track, which resulted in an injury to one of her legs. Then at eighteen, Weléla took a leave of absence from school to pursue dance full-time, following a conversation with a school dance teacher. “I took it upon myself because I wasn’t living at home, and I knew it would be hard. I ended up just pursuing classes in Los Angeles. [They] were more a bit more edgy, more hip-hop, more contemporary dance. It was a lot of dance auditions. I had never gone through so many castings . . . Consistently getting turned down was really new for me. It was interesting, because you start to question your ability. I took many years off. I had an injury from track and I kept dancing on it and it got really bad. I just think that was a pivotal year for me, 1988—a lot changed. So I decided to apply to school at the Art Institute of Chicago and NYU . . . [The Art Institute] saw my work, and the woman signed this pink slip, saying, ‘I’m giving you immediate admission to the school.’”

Weléla received a grant for the first year and began doing yoga, which healed her leg. She then auditioned for a black dance studio and was accepted, so she began dancing at night while continuing to take classes during the day. Soon after, Weléla got an agent in New York and fully began her dance and choreography career.

WELÉLA ON THE MEANING OF POWER

“Power means to submit into the service of others. I think the most powerful ones are those that know how to serve others. Haha, I’m still working on that myself. I could tell you what it’s not: It’s not what we think.”

“[Sensuality] is a big deal for me because it’s innate, but it’s generational—the older I get, I believe it’s gonna change. It’s a bit fiery and red in your twenties, and then in your thirties, it starts to slow down, it becomes more sensuality than anything . . . And women should not feel caged in to feel sensual . . . that goes with body politics as well, that whole thing about how women feel about their bodies and how men feel about their bodies in a sensual space.”

Linda Swan is an avid reader of fantasy, gardener of seedlings, and mother of a tiny nugget. She studied literature in college but has learned even more by diving into her experiences since graduation and taking risks, big or small. She is a slow and self-guided student of Buddhism who seeks peace within her life and compassion in her interactions. You may find her in the mountains of Asheville within the year, if all goes according to hope. Check out more of her writing at Discount Stories.

Bradley Leach is a Paris-based narrative and fashion photographer and videographer with a fetish for the ‘80s-‘90s, 35mm film, and grunge lifestyle. His photos often portray an emphasized sense of vibrant colors and utilize harsh, on-camera flash to achieve a playfully rebellious result.