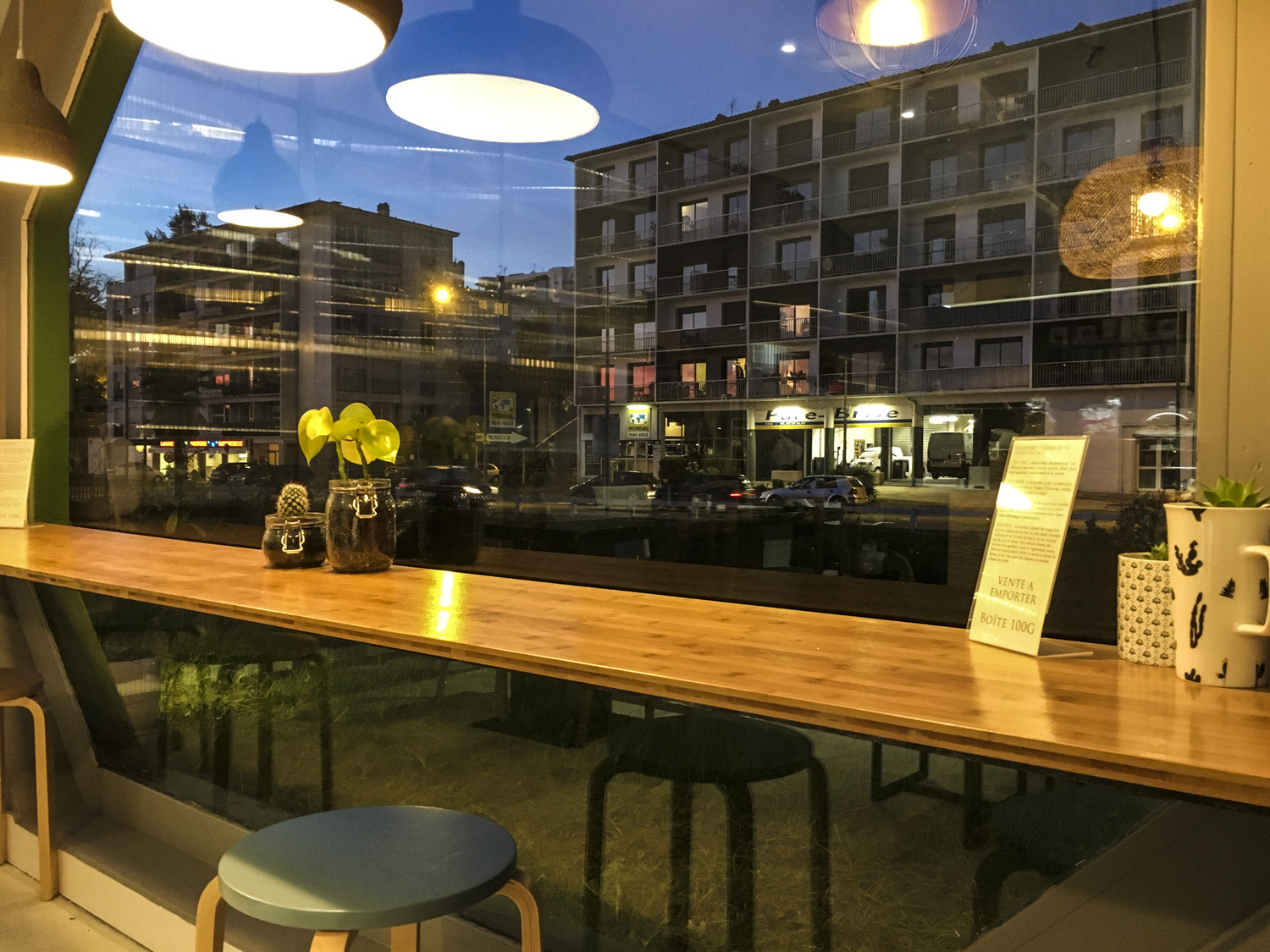 After months away, our editor Kami Rice has returned to her apartment in southwestern France. She’s been busy rediscovering her town, seeing things afresh after a long absence.

Contrary to all the stereotypes, not everything here in France is quaint. Let’s just acknowledge this hard truth from the beginning.

For example, how quaint can it be to live above a shop that replaces broken windshields? I haven’t yet heard that detail mentioned when foreigners describe the idyllic French life they dream of retiring to.

But that’s just where these people live, the people whose lives I’m spying on this afternoon as I sit in a new cafe across the street from their homes. I tucked a magazine into my bag as I stepped out my apartment’s door, but I can read anywhere. Now that these balconies have captured my attention, my curiosity won’t let me ignore them. I’ll read later, elsewhere.

The top floors of the barely-descript building may have the saving grace of hosting a view of the now-snow-capped Pyrenees. Such a view would be nice, even stunning. But three of those six top-floor balconies look uninhabited, their cage-like blinds drawn down tight— the decidedly not-quaint metallic version of the traditional, and very quaint, wooden shutters that the French close each night and open each morning, as much a part of each day’s chores as doing the dishes and making the bed. In my numerous abodes during these five French years (and counting), I’ve so far avoided living behind these not-quaint, metal “shutters” that remind me of the rolling doors that seal off the back of delivery trucks. I hope to continue avoiding this form of incarceration.

At least two to three of these particular 30 balconies across from me belong to people who have added chairs and a table to their perches, suggesting they are residents who sit outside now and then, perhaps even for a breakfast or dinner en plein air. Those are the people I want to befriend. Outdoor meals generally count as quaint, though the adjective is more questionably applied when there’s a busy road down below to contend with. But maybe these presumed outdoor eaters look past the road to the scrubby gave, the small stream bordered here by unkempt greenery and industrial-looking buildings. It may be slightly unsightly, but at least it’s a small bit of nature fighting against the concrete. Perhaps, after all, this urban water feature would create quaintness while you sip a glass of wine on your small rectangle of outdoor real estate.

One of the smaller balconies is empty of chairs or table but is adorned with two or three cheery flower boxes showcasing an effusion of red that brightens the gray building and makes this balcony almost qualify as quaint, despite the very not-quaint and unimaginative business sign hanging just below it, marking the entrance to the Place Where Windshields Are Made New.

Just beside this splash of energetic color is another balcony that is for sale, advertised by a less pleasing splash of color—hot pink—and appearing to include an extra wood door leaning against the wall. Is this the balcony you’ve been dreaming of? Bring some flower boxes to complement your new neighbor’s good aesthetic taste and get a random, free door thrown into the bargain.

Perhaps the clothes drying behind the metal balusters of three balconies appreciate the fresh air—if the exhaust fumes aren’t too bad—as they shed the water that made them clean again. And their owners probably appreciate not tripping over drying racks in indoor spaces that are unlikely to be large. But if the rooms are small, that makes them more quaint, right? In a similar vein, a few of the remaining balconies seem to be glorified, but fairly tidy, open-air storage closets. Not surprising, since many French abodes—quaint or otherwise—run short on this commodity.

Night is falling on this sunny, late-autumn day, and now the pink-orange-violet rays of sunset are reflecting on the lower left quadrant of windows; lights are popping on inside one or two or three apartments; and the windshield shop looks to be winding down its day’s work of exchanging broken glass for unobstructed views of the world.

It’s creating a tableau that is—dare I write it?—rather eye-catching, and cozy . . . and quaint?

Maybe in this magic hour nearly any abode can, after all, merit adjectives of the quaint and homey variety.

So in a pinch, I guess maybe it’s okay for you to hang onto those French dreams after all.

Sometimes dreams do come true, or so they say.