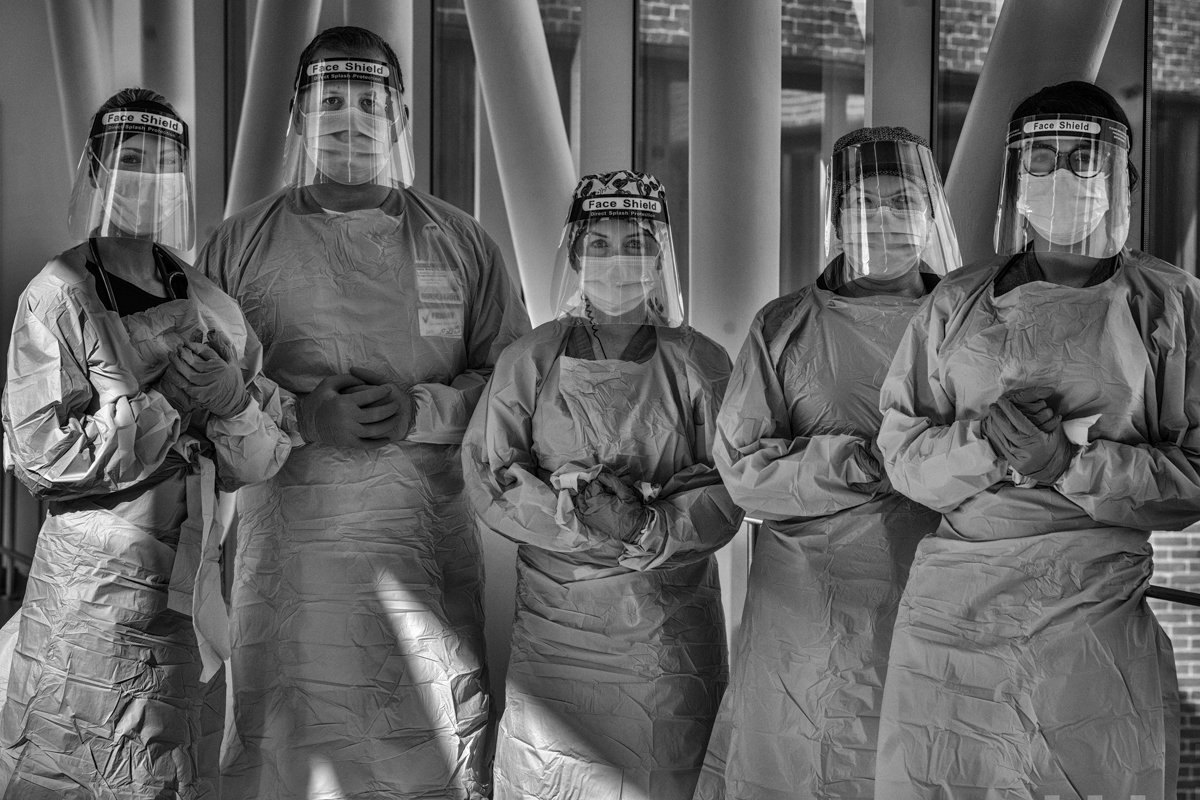 Illustrating their divergent perspectives and practices, four photographers from Nashville, Tennessee, USA, each with a solid foundation in newspapers, have prepared a pandemic-era exhibit that is slated to be presented in 2021 at the Scarritt Bennett Center and at Vanderbilt University, both in Nashville. In the months leading up to the exhibit we’re featuring their work in an ongoing Anthrow Circus series, a project that is as much a study of photographic styles as a record of the pandemic.

In this collection, “The Darkest Before the Dawn,” from their ongoing series, Nashville-based photographers John Partipilo, Dawn Majors, Bill Steber, and Joon Powell reflect on the greatest challenges faced during the pandemic. From a national racial reckoning, to Americans’ inability to safely work and connect, to the feelings of overwhelm and loss, the group explores all these hurdles encountered during a turbulent year of pandemic.

Members of Black Lives Matter lay in silence near Legislative Plaza in Nashville for 8 min and 45 seconds in tribute to George Floyd, who was killed in police custody.

I’ve been on semi-lockdown with my eldest sister during the past year of the pandemic. She is immune compromised so we are on high alert in my house. On this particular day, as I passed her room to get to mine, I captured this image. I’m not sure what my temperament might have been if I’d been locked down alone. Since I still work around the general public, we keep separate most days and wear masks within common areas. But in our rooms, we are free—well, as free as anyone gets to feel during these uncertain days.

Dawn Majors’ photos are a quiet exploration of the intersection of nature and humanity’s odd creations, with a gentle affirmation of her own identity. At once painterly and specific, macabre and whimsical, Majors’ full-on embrace of her cell phone as a tool shows a jaunty appreciation for pedestrian discoveries with an escapist appeal.

Blues artist Lucious Spiller wears a protective mask beside a massive bottle tree created by artist Stephanie Dwyer at Hopson Plantation in Clarksdale, Mississippi. Bottle trees go back to eighth-century Congo as a means of keeping away evil spirits. The tradition came to America through the culture of enslaved Africans and continues to this day. Hopson Plantation was the site where the first commercially produced mechanical cotton picker was demonstrated, the adoption of which led to the great migration of Blacks from the South to the North.

The hardest part of the pandemic for me has been the fear of being overcome by forces outside my control, such as a person in my circle becoming infected or becoming ill from prolonged isolation in an unstable economy. This image shows my then five-year-old daughter waking from a nap. The shadows appear to close around her neck while her face has an Ophelian expression. While we so far have been able to stave off personal tragedies, there is still a feeling we could easily be pulled underwater.

Joon Powell wields both a digital SLR and a 4×5 film camera to show her family’s isolation during the coronavirus pandemic. Drawing from the tradition of Emmet Gowin or Sally Mann, Powell documents her family, often using a series of diptychs to deepen the images’ meaning.