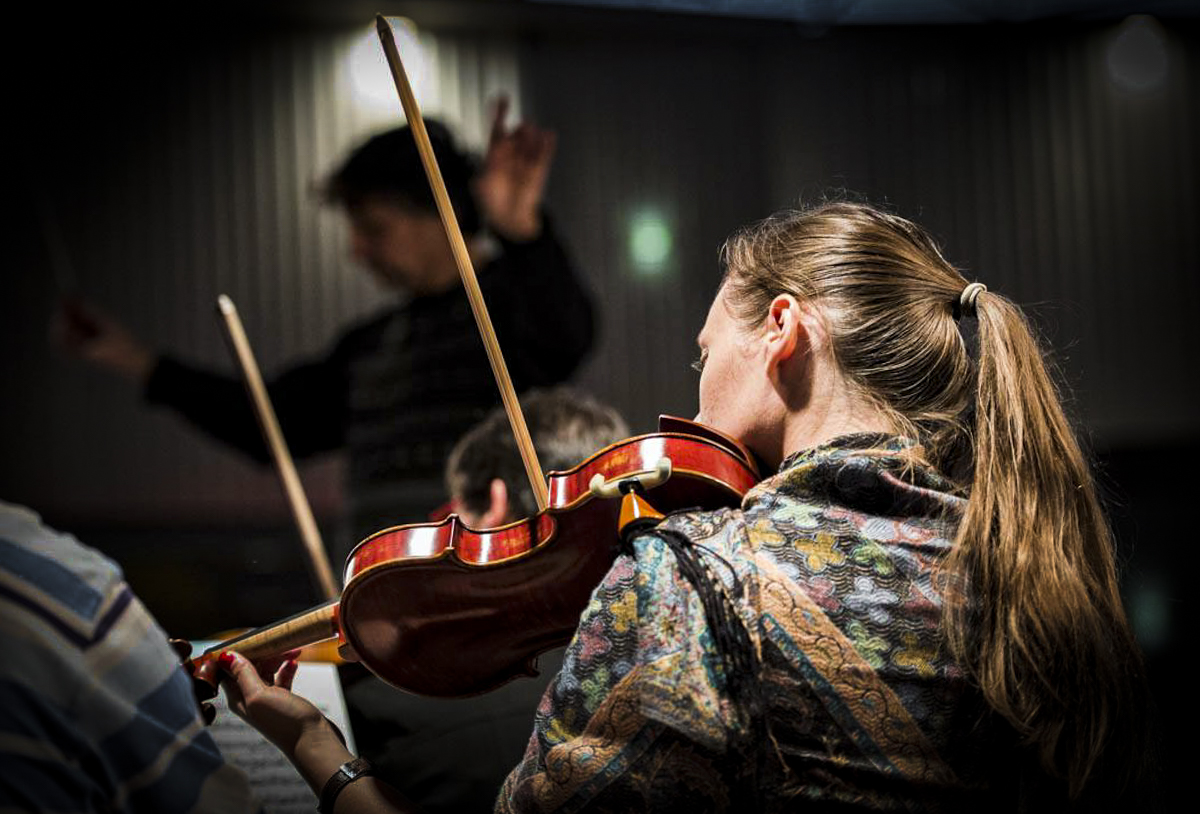 Bernard Salles conducts while Eleanor Martindale and other musicians in a Pau, France-based orchestra play. In this photo you can see how the chin and shoulder rest are used to hold a modern violin. Photo by Pierre-Antoine Lalaude.

One of the sectors hit hardest by the COVID-19 crisis is, of course, culture. Anybody involved in the performing arts has had a tough year: Theatres closed; festivals canceled; musicians, actors, dancers—and administrators, agents, technicians, and everybody else working behind the scenes—all out of work and out of pocket.

Although the stakes are, of course, not nearly as high for amateur artists as for artists who gain their whole livelihood from their art, this year has still been confusing and difficult for those of us who practice art “in our spare time.”

I have played the violin since the age of 6, and my partner, Bernard Salles, is a professional musician. Together, we have created various musical organizations. The largest is a community orchestra where we live in southern France, Orchestre Symphonique d’Alenya-Roussillon, which is comprised of both paid professionals and high-level amateurs. We perform, on average, over a dozen concerts a year. I play in the orchestra and also handle the administrative aspects of the group. Bernard conducts the ensemble and organizes the artistic side of things.

OSAR rehearses as a full orchestra in their performance space at the Caves Ecoiffier d’Alénya. Photo courtesy of OSAR.

2020 was looking to be a good year. We had performed a New Year’s concert and were gearing up for an Easter concert in March: Mozart’s Requiem and a piece written by Bernard based on the seven last words of Christ. On February 23 we met up with some of our musician friends, and conversation moved towards the strange new virus that had reached northern Italy. Two of our party were meant to be traveling to Venice the next week; they thought it should still be possible.

But in the end, it wasn’t. Our friends canceled their Venice trip.

Yet while the virus began raging in Italy, it hadn’t yet hopped the border en masse to France. So for a few weeks, our rehearsals continued as normal: Our fingers worked at learning their notes and Mozart’s music rang from our practice space. We kept our ears on the music but one eye on the news, wondering what action the government would take as virus figures began rising, and rising, and rising still.

My parents had planned to come across to France from the U.K. for Easter. They too canceled their trip.

A week before our Easter concerts were due to take place, France entered its first lockdown. On the one hand, we were relieved that, as organizers, our responsibilities were suddenly lifted. On the other, we were devastated that months of preparation would come to nothing. We reimbursed ticket holders. We informed them that we were planning to reorganize the concerts in June.

We were overly optimistic. In June, we were still not allowed to meet together in groups of more than 10.

And so, in that great musical tradition, we improvised.

Some of our orchestra members decided that if we couldn’t play symphonic music together, well, we’d strip it all back down and form a smaller baroque group instead. About eight of us managed to find second instruments for this historically informed ensemble, which included equipping ourselves with baroque bows and gut strings (yes, animal gut—vegetarians look away now!), and in mid-June we got the go-ahead to use our rehearsal space in a reconverted wine cooperative.

The modern violin has steel and silver wound strings, with fine tuning mechanisms for the higher strings. It’s pictured here with its longer bow, as compared to the bow used for playing baroque music. Photo by Eleanor Martindale.

This late-19th century violin is set up to play baroque music, with the chin rest removed and with lamb gut strings that have to be tied to the tailpiece. On modern strings, there are metal balls at the end of the strings that holds them in place, saving the violinist from dealing with tying fancy knots. Gut strings break easily and go out of tune easily. Photo by Eleanor Martindale.

I’ve been playing the violin for most of my life, and holding the instrument and the bow is as natural to me as walking. But changing to a baroque instrument was suddenly different. Baroque violins don’t have shoulder or chin rests, and their bows are shorter and lighter. These violins are also harder to tune. I had to learn the feel of the instrument all over again, how to keep it tucked under my chin without its slipping—and without giving myself a bad back—how to make it sing, not squeak.

We’d planned that at Christmastime we’d give our first concerts in this baroque style, but these concerts too were, in true 2020 style, canceled.

So again we improvised and instead recorded music to share with our audience the germ-free way, virtually—because Christmas wouldn’t be Christmas without a little music.

Eleanor Martindale is a self-employed online tutor, teaching English literature, creative writing, and French to young people all over the globe. Born and raised in the U.K., she has spent all her adult life in France and now lives in French Catalonia with her French-Catalan partner, Bernard Salles, a professional musician. She plays the violin in several musical groups that Bernard runs, and when she isn’t teaching, she is usually found working on one of their orchestral projects. In whatever spare time she can find, she enjoys photography, drawing and painting, and of course writing.