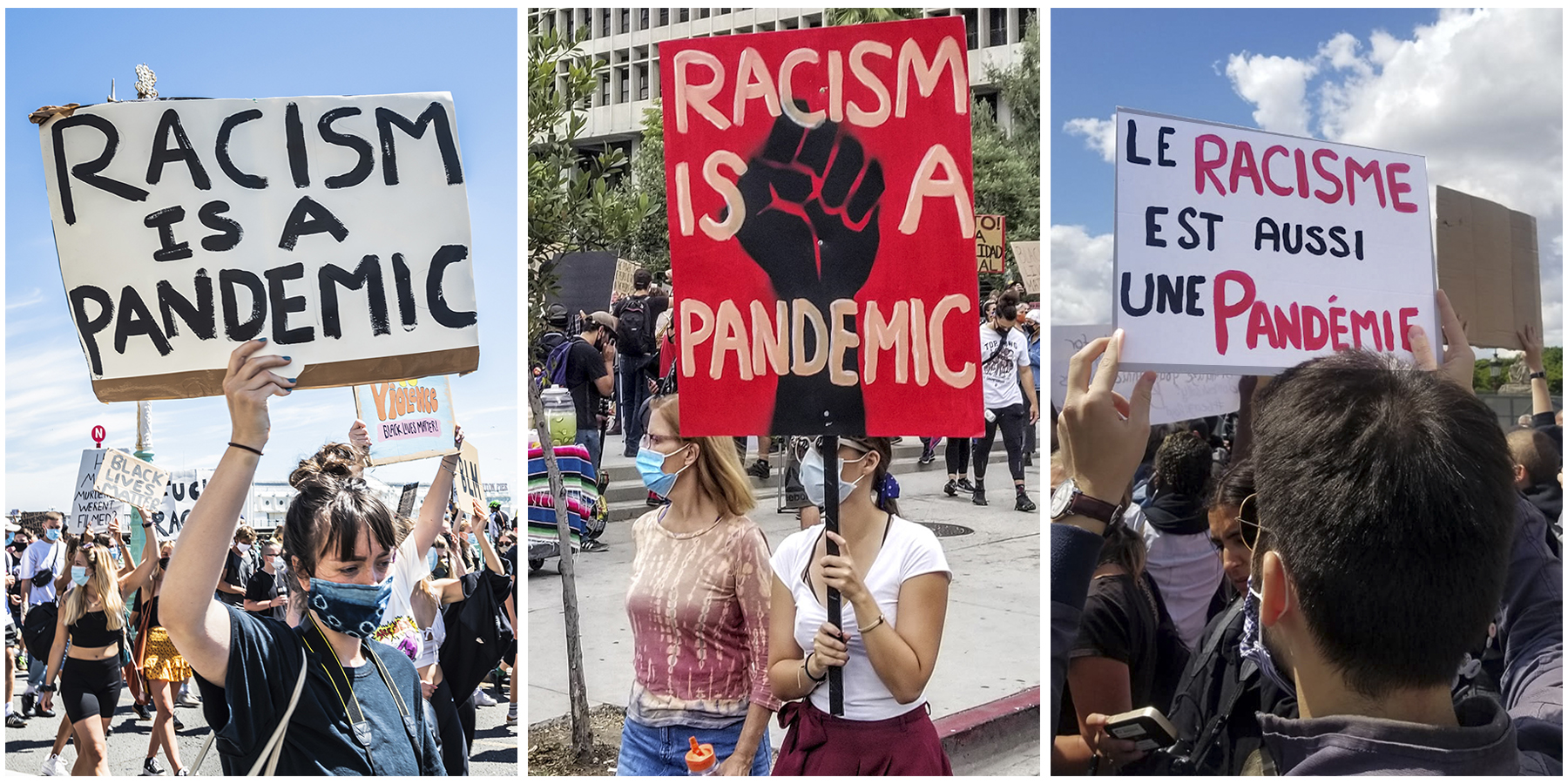 In this “year of the pandemic,” every big news story takes place against the backdrop of the coronavirus crisis, a reality that affects these events in ways sometimes obvious and sometimes not yet clear. Protests in the United States over police violence dominated world news cycles this summer. But like the pandemic, the protests didn’t stop at national borders. In this article, we bring you observations in word and image from correspondents of differing nationalities who witnessed protests in Brighton, England, and in Los Angeles and Paris. Their reports remind us that protests over police violence have been a worldwide story taking place in the midst of a pandemic, an event that—as our View From a Pandemic series shows—has tied humanity together in a common struggle. Together we are humans combatting a microscopic virus as well as jointly fighting the universal disease of prejudice against people who are different from us.

Over 10,000 residents of Brighton trooped out in a Black Lives Matter protest march in response to the death of George Floyd, a Black-American man who died by asphyxiation in the custody of policemen in Minneapolis, Minnesota. His death sparked a chain of protests across the world. These protests took place in spite of social distancing rules required to curb the spread of the coronavirus pandemic that has infected over 10 million people and killed over 500,000 worldwide. [Editor’s note: These numbers have, of course, climbed since this report was filed.]

The demonstrators walked for about five hours from Madeira Drive to The Level, where the organizers gave speeches. The protesters, most of whom wore face masks, chanted, “No justice! No peace!” and “Say his name! George Floyd!” They carried placards made from cardboard with such inscriptions as “Racism is a pandemic,” “More scared of a racist world than a pandemic,” and “The UK is not innocent.”

In Los Angeles, California, the U.S.’s second largest city, many demonstrations took place in the wake of George Floyd’s death under police custody. Some days in June saw several rallies and marches throughout the daytime and evening, mainly in downtown L.A. but also in other parts of the city. These marches and rallies varied in size from just a few dozen participants to several hundred to many thousands. While a few turned violent and were marred by looting, most were peaceful.

Demonstrators were mostly relatively young, a mix of millennials and Generation Z, the generation following millennials. On streets and parks, they often “took the knee” against racism like football player and activist Colin Kaepernick, held ubiquitous “I Can’t Breathe” and “Black Lives Matter” signs, chanted slogans against police brutality, and raised their fists for racial and social justice. Reflecting the city’s world-renowned multiculturalism, protesters featured a cross section of L.A.’s diverse ethnic and racial communities. They included an arguably unprecedented number of Whites responding to the viral video of a White police officer in Minneapolis pressing his knee on the neck of Floyd, a Black man pleading for his life and heard saying, “I can’t breathe.”

I spent a day joining the peaceful protest in Paris near the American Embassy. The French people showed up in droves to support the Black Lives Matter movement. The gendarmes (police) were present but allowed protesters to have their say.

I found myself standing in the midst of the protesters crying. I sobbed for two reasons. First, because as we shouted her name, I thought about how Breonna Taylor could have been my niece or sister and now she’s gone. Did she even have a chance to cry out for help, or did she just die in her sleep? I wondered. Second, the feeling of people coming together to support a cause—and this cause in particular—was extremely emotional for me. To be experiencing this protest in a foreign country was something else.

Most of the signs I saw and the chants we did mentioned Americans George Floyd and Breonna Taylor. There were a few people with protest signs in a language other than French or English, with a translation beneath it. I also overheard an interview with a woman speaking in French and making very powerful statements. During the interview she named some of the people who have been killed by police in France. It was in that moment that I realized the problem is everywhere. It’s just that the U.S. is the shining star.

Tunde Alabi-Hundeyin II is a freelance documentary photographer and filmmaker with a passion for humanitarian narratives that contribute to improving human conditions in marginalized communities and disrupt existing hierarchies of power relations. He has executed many media projects for charity and corporate organizations, some of which have been broadcast, published online, and in traditional media. He has been commissioned by several charities and corporate and governmental organizations, including UNICEF, GTBank, Globacom, Lagos state government, and University of Sussex in their visual storytelling. His images have been exhibited in Nigeria, Ethiopia, Germany, Britain, and the USA, while his short films have been screened at Blackbirds Film Festival, iRep International Film Festival, and at the United Nations General Assembly.

César Arredondo is a freelance multimedia journalist with more than two decades of experience working for Spanish- and English-language media outlets, covering immigration, education, arts, culture, Latin rock, activism, and hard news. His journalistic work has been published in newspapers like La Opinión, the Orange County Register, and Latino Leaders Magazine. Arredondo’s works have won three Best of the West journalism awards for the coverage of the Sundance Film Festival and the Occupy movement in Utah, and another prize from the National Association of Hispanic Publications for an article on education. Arredondo is the current editor of LatinoLA.com and plans to launch several news websites and blogs in English and Spanish.

Ghanaian by heritage and nationality, Sylvia Asare lived in the U.S. from her adolescent years onward until she began spending more and more time in France. She is now based in Paris where she is completing executive master studies in luxury brand management at ESSEC Business School in France and launching Green Luxxe, a luxury concierge service offering travel, lifestyle management, and corporate services with a focus on sustainability and ethical luxury.