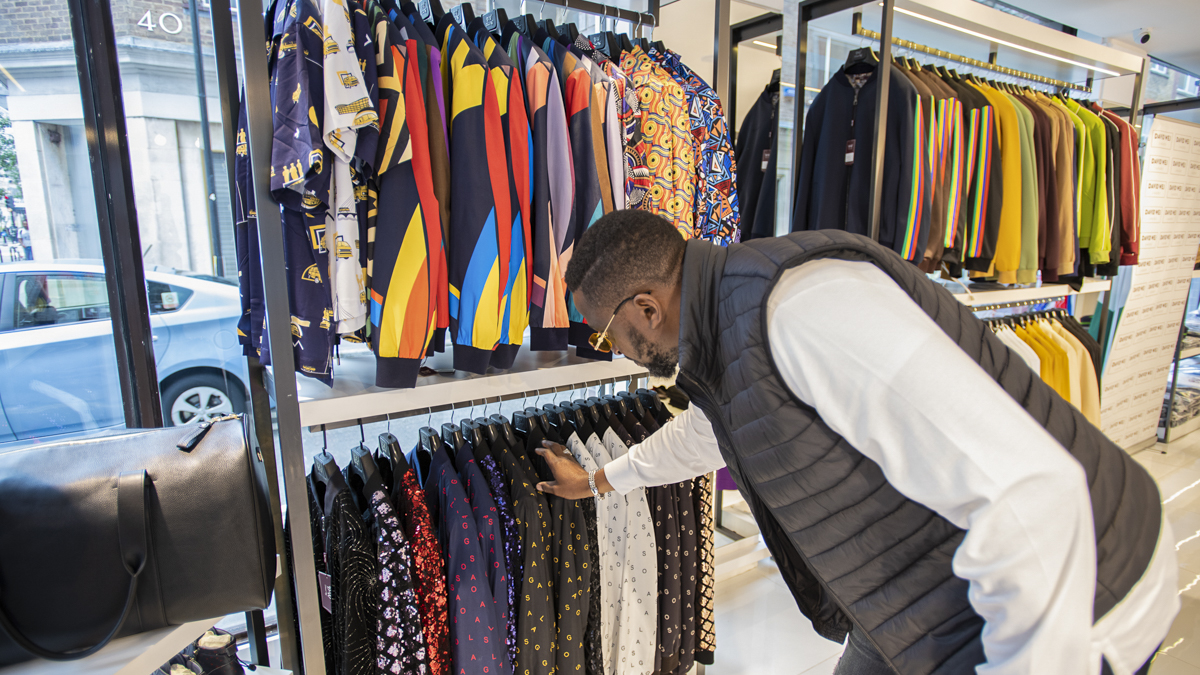 A customer looking through the David Wej bomber jackets inspired by traditional elements.

Preceding its grand opening in June, menswear brand David Wej was in the news across Nigeria and the United Kingdom in February this year for agreeing to a deal to open its debut UK stand-alone store in central London, despite the current uncertainty hitting retailers.

The news of the deal was striking for two reasons: first, it was announced at a time that the pandemic was still very much hitting the fashion industry specifically and all non-essential retailing generally. According to the UK’s Office for National Statistics, total UK retail sales volumes in 2020 fell by 1.9 per cent compared with 2019, marking the largest annual fall on record.

Second, for a fashion brand that started 13 years ago from a car boot in Lagos, Nigeria, opening a branch beyond Nigeria in one of the world’s fashion capitals is a move that helps to put Nigerian fashion on the map. Already, this month David Wej UK was named Menswear Designer of the Year at the first annual African Fashion Awards ceremony, held in London.

As noted in the Evening Standard’s February report on the news, the new 1,360-square-foot flagship store at 38 Great Portland Street offers the brand’s signature traditionally inspired bespoke jacquard suits, classic shirts, and accessories. The store officially opened to customers in June during a four-day ceremony.

Staff of David Wej pose at the entrance to the store on Great Portland Street in London’s West End during the opening ceremony in June. Adedayo David Eweje, the creative director of David Wej, walks out of the store.

The designer behind the brand

Adedayo David Eweje is a 44-year-old Nigerian who is popular for building a fashion empire in Lagos. With six Lagos outlets—Victoria Island, Ikeja, Lekki, MMA 2, Surulere, and Yaba—and a strong presence in all top online shopping platforms, David Wej is on the rise, helmed by a young man making giant strides in the Nigerian fashion industry. The expansion to London is more tangible evidence that his pioneering work in Nigeria’s fashion industry is yet to plateau.

Born in Nigeria January 29, 1977, Eweje attended Command Children School, Ikeja, and Command Secondary School, Ipaja, before he proceeded to Lagos State University. He started his career in the telecommunication industry with Intercellular Nigeria Limited and then moved to Econet Wireless and later to Globacom before founding his fashion brand.

As he told Ovation International during his 40th birthday in 2017, Eweje believes fashion was an innate thing for him as he discovered the passion for fashion at the age of five. “That was when I learnt how to tuck-in and from there, getting into secondary school, I was like a neat freak, my school uniform was properly ironed, sparkling white socks and well-polished shoes. I have always had neatness in my blood. So, when I got to the university when one had the opportunity to pick and wear what he or she liked, I was on top of the world. I explored a lot and I won many awards, including the well-dressed student in my department.”

Further in the interview, Eweje said that fashion was his signature when he was growing up. “It was the one constant thing, and it was no longer a big deal when people complimented me that I always look so good. When I got to Globacom, it got to a stage where people started persuading me to help them buy clothes for their husbands and wives. I didn’t think too much about this until when I began to ask myself what I could do on my own, and I found out that the easiest thing I could do was following my passion, which is fashion.”

Adedayo David Eweje, the creative director of David Wej, discusses with a couple.

Nigeria is home to Africa’s fastest-growing fashion industry with a booming fashion business that doesn’t appear to be slowing down anytime soon. Rising internet broadband access, the ease with which young people can buy their favorite fashion style online, and unquestionably rising income levels are all elements that have been recognized as contributing to the industry’s rise.

According to the Nigerian Bureau of Statistics’ GDP figure, the textile, apparel, and footwear sector has grown at an average of 17% each year since 2010. The Nigerian fashion industry has risen in size and complexity over the last decade, gaining international interest. Despite this development in the sector, Stears Business reported in a 2019 article that many fashion commentators continue to criticize the pace of market growth of the industry, and with good reason.

The global fashion industry is worth over $2.5 trillion, with Africa’s share estimated at less than 1% of that total. Meanwhile, Euromonitor suggests that the Sub-Saharan fashion market is worth $31 billion, with Nigeria accounting for 15% of that ($4.7 billion). This is materially lower than South Africa’s share ($14.4 billion), even though Nigeria has nearly four times as many people.

Nigeria’s comparatively small share of the African fashion market given its population can be attributed to Nigerians’ taste for local over foreign fashion, according to a McKinsey survey that found that only 11% of respondents considered international brands to be more fashionable than local brands. Stears also reported that while research like this presents a case for a thriving local industry, there is still an apparent disparity with reality: roughly 60% of the clothing sold on Jumia, Nigeria’s largest online fashion marketplace, is imported.

Nigeria’s population is predominantly young and vibrant—half of the country is under 19 years old—and David Wej’s Eweje represents the country’s young energy as he springs off from his success in the Nigerian fashion sector and positions himself to put Nigeria in the global fashion spotlight with his recent London launch.

Some of the outfits and accessories that are available at the David Wej store in London.

Paving the way for African designers

Speaking to the Evening Standard in February about expanding to London during a global pandemic, Eweje said the decision was a natural evolution for his fashion company. “COVID-19 will soon be a thing of the past, and we wanted to be able to better serve our UK and European customers. Post-pandemic, the fashion landscape will most definitely change, and we will be well positioned to respond to the changing appetite that our customers demand.”

Eweje explained that his company is a proud Nigerian brand and the headquarters remain in Lagos. “I want to pave the way for other African designers especially during this critical time where diversity in fashion is such a huge conversation. This move is not just about us expanding as a brand but about putting Nigeria on the global fashion map.”

Unique to David Wej’s Nigerian craftsmanship and fashion is “the way in which we incorporate our traditional prints and infuse those with western elements,” Eweje told Fibre2Fashion. “When this is coupled with the tailoring and hand finishing that we employ in over 80 percent of our collections, we are able to add something truly exciting to the global fashion mix.”

The UK ranks second after the United States as a top destination country for Nigerian immigrants, but Eweje told Anthrow Circus that David Wej isn’t limiting its UK customer base to Nigerians who have relocated.

“Our brand has been reaching the Nigerian diaspora population and beyond this demography,” he said of their UK sales. “Since we launched officially in June, the public response has been phenomenal, especially via word-of-mouth marketing from satisfied customers. This is partly responsible for our recent award as the Menswear Designer of the Year. We’ve got miles ahead of us, but the market penetration has been really very positive.”

Some of the shoes that are available at the David Wej store in London.

Akintunde Babatunde has extensive experience in development communication with specific focus on digital media innovation and development, investigative, and data journalism; civic engagement; and social research. He has published articles on exposing corruption, verifying fake news, and advancing transparency and accountability in Nigeria. He is currently a master's degree student in media practice for development and social change at the University of Sussex in the U.K.

Tunde Alabi-Hundeyin II is a freelance documentary photographer and filmmaker with a passion for humanitarian narratives that contribute to improving human conditions in marginalized communities and disrupt existing hierarchies of power relations. He has executed many media projects for charity and corporate organizations, some of which have been broadcast, published online, and in traditional media. He has been commissioned by several charities and corporate and governmental organizations, including UNICEF, GTBank, Globacom, Lagos state government, and University of Sussex in their visual storytelling. His images have been exhibited in Nigeria, Ethiopia, Germany, Britain, and the USA, while his short films have been screened at Blackbirds Film Festival, iRep International Film Festival, and at the United Nations General Assembly.