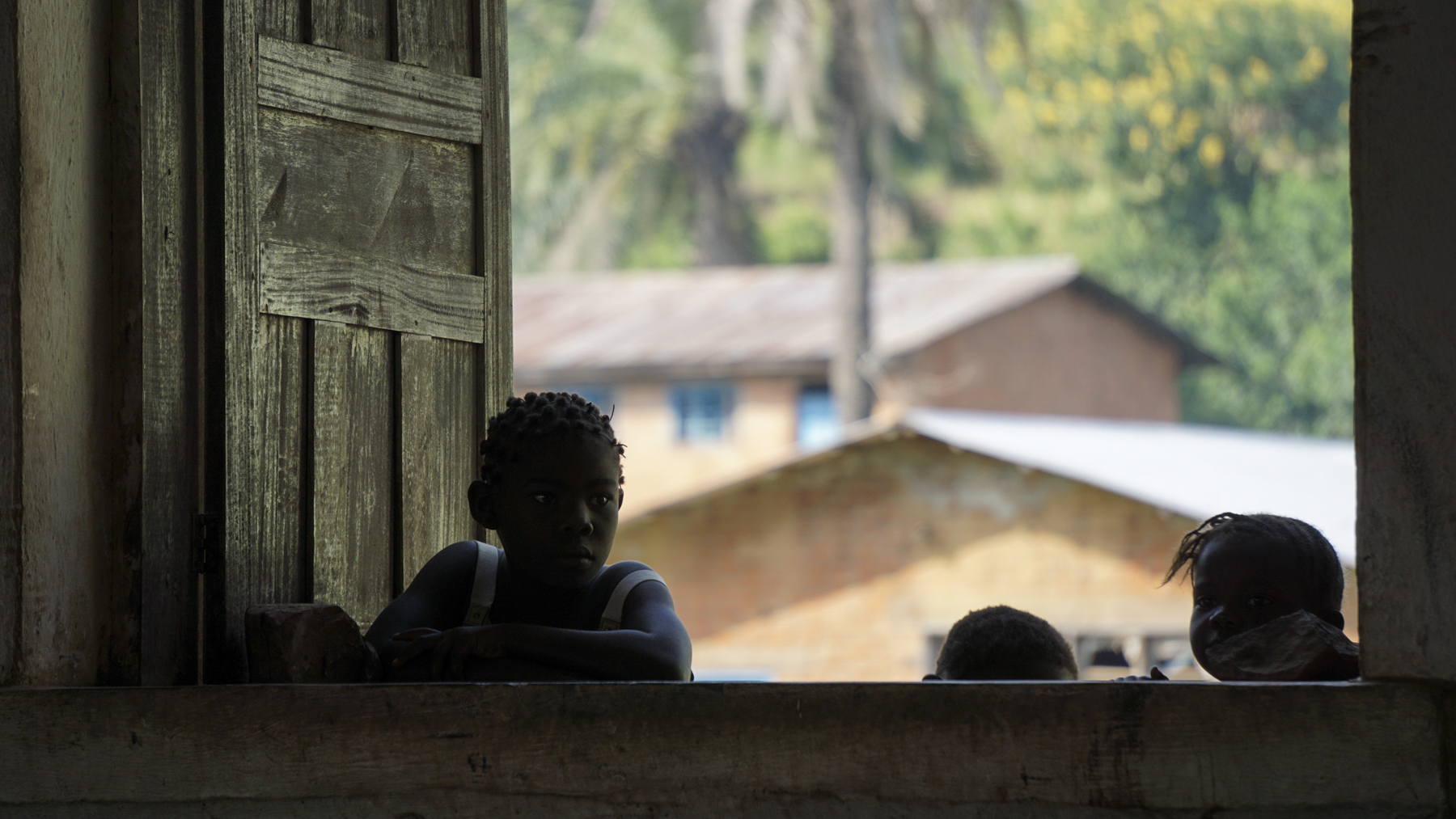 EXCERPT FROM A NOVEL BY BENJAMIN KISONI
PHOTO BY DARIN DUNN

The novel Kimbé is set in eastern Democratic Republic of Congo. Visit this week’s bonus article to see a photo album of images from “Kimbé’s world”!

What’s that?” Kimbé suddenly slowed his steps. A strange, dark object stood beside the road, over a hundred yards away past the metal bridge where he was heading. While trying to determine whether it was a tree trunk or a person, Kimbé did not recall having seen any such object at that place since he started passing daily to go to and from the family farm.

Now, he was rushing home from the farm late in the evening after an exhausting workday. Questions swirled in his mind over what he was seeing. Life in that part of eastern Democratic Republic of Congo had become perilous due to rampant violence.

Kimbé cautiously approached the object only to discover that it was a heavily built teenager wearing a ragged black coat with a sheathed double-edged knife attached to his waist belt. He was holding a heavy club in his right hand as if he were waiting for a wild animal to kill. Kimbé recognized him. Both of them were in the same school a few years before, but Kimbé had not seen him for a long time and did not remember his name or where he lived. Kimbé recalled how he used to tease this boy at school because of a strange language he spoke, even though he was older than Kimbé.

In addition to French that was taught at school, Kimbé’s schoolmate spoke Swahili awkwardly along with another language that Kimbé could not identify. It didn’t have any similarity to Kinande, the local tribal language spoken widely in the community. Kimbé used to refer to the boy as a “foreigner” since the boy’s family did not belong to the local community.

“You seem to be waiting for something, aren’t you? All the farmers are heading back home as it is getting late,” Kimbé addressed him in Swahili.

Twirling the club slightly in his brawny hand, the schoolmate stared fiercely at Kimbé without uttering a word.

“I remember you,” Kimbé tried to draw him into conversation and defuse the boy’s aggressive look. “We were together at Tumaini Elementary School!”

“Mind your own business and leave this place—quickly!” the boy threatened.

“I said, ‘It’s not your business.’ I know why I’m here,” the schoolmate replied as he slowly turned his head to look into the shadowy bush behind him.

“Let me leave you alone. I’m afraid if your heavy club doesn’t end up smashing my skull, your sharp knife might not spare my throat. Bye, man,” Kimbé cut short the exchange.

“That’s the best thing you must do, you farm worshipper. Don’t you know that we can take your farm for free and no one will bother us?” the schoolmate lashed out.

If my schoolmate had scars on his forehead or a red-colored strip cloth wrapped around his head, I’d conclude he had become a Mai Mai. But he doesn’t belong to the local community. The Mai Mai don’t recruit foreigners for fear they might not be loyal to the local community and can easily disclose Mai Mai’s secrets to enemies. But why did he refer to “we” taking my family’s farm? Who are the “we”? Kimbé wondered as he walked away.

The Swahili name or cry “Mai Mai” (mai meaning “water”) refers to local militia’s use of a magic potion they believe has power to turn enemy bullets to water. Different militia groups had been nicknamed Mai Mai. Sometimes they liked the nickname since it implied their use of magic on the battlefield. Other times they rejected it—since it made the army overlook them as mere gangs of thugs—and preferred to be called “The Liberators.”

Kimbé, the protagonist for whom the novel is named, is an ambitious teenager in the Democratic Republic of Congo whose dreams are shattered when his father is brutally killed by unidentified thugs. Published by Step Publishers in Accra, Ghana, copies of Kimbé’s story of renewed hope are available in the United States by contacting the author directly.

Benjamin Kisoni is a pastor from the Democratic Republic of Congo who was forced into exile in the United States. He has experienced firsthand the atrocities and devastation of war, violence, corruption, poverty, and unemployment in his country where he served as a school principal, Christian writer, radio presenter, and caring citizen. Benjamin was trained in pastoral and systematic theology, in Christian ethics, and in African culture and sociology. He is currently exercising a pastoral ministry among African immigrants in the International Christian Assembly in Johnson City, Tennessee.

Darin Dunn is a media producer based in Chiang Mai, Thailand. From there he supports various projects around the region in bringing their stories to the world.

One thought on “Kimbé, an Excerpt From a Story of Disillusionment and Hope”