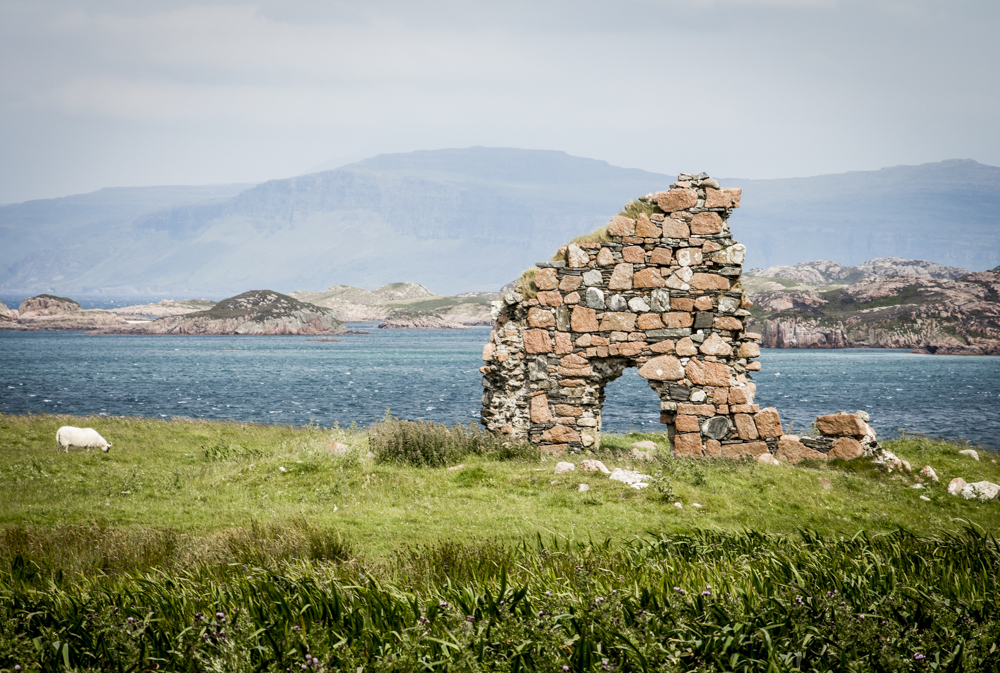 This week our Culture Keeper passports take us to the famed but tiny Scottish island of Iona for a fleeting moment of reflection, as recounted by our newest Culture Keeper contributor.

In A.D. 563 after being banished from his native Ireland, St. Columba landed on Iona in the Southern Hebrides with the intention of bringing Celtic monasticism and Christianity to Scotland as penance. The island was the first spot he reached from which he could no longer see the outline of his beloved Ireland in the distance. Iona proved to be the perfect settling place for St. Columba, and as he began the construction of a wood and clay abbey, his following and fame grew.

The isle remains a popular pilgrimage site, exuding a magnetic draw to those who journey to it. Upon arrival, I sensed Iona knows she is still wild and untamable. Sea tossed, windswept, battered by years of isolation and subsequent resettlement, her magic has yet to diminish. A visitor gets the distinct feeling that he or she is only permitted entry because Iona is feeling courteous.

Home over the centuries to saints, pilgrims, monks, and others seeking contact with God, or some great divine being, or to become more in tune with one’s own self, the island now hosts a smattering of shop fronts, a quaint hostel for spiritually weary travelers, and a little restaurant that prides itself on elderflower lemonade. The community living year-round on the island numbers about 150—mostly farmers, artisans, and a few shop owners who scrape a living off travelers from far-flung places. Despite the challenging spirit of Iona, these permanent residents have reached a peace with her. They humbly come and go, making an honest wage from simple living.

Iona rests so separate from mainland Scotland that it is impossible not to embark on an inward journey as you stand in the midst of such ancient magic. The physical separation and isolation heighten a sense of internal divide, creating space for introspection.

Reflective of the wild nature of Iona herself, the morning of our departure from Oban—a town on the Scottish mainland—to the island of Iona was fraught with high winds and choppy seas. The multi-leg journey was to begin with a ferry, but the first scheduled ferry from Oban was delayed by two hours, and then canceled altogether for fear of overnight storms. But the second ferry was more bold—deciding to brave it anyway, weather be damned.

This ferry bore us to the Isle of Mull, which is famous for mussel fishing and offers a gentler countenance than Iona’s. Across Mull we traveled in a motor coach driven by a contagiously happy driver who merrily ignored the speed limits. Thanks to his mad-dash motor-coach driving, we still managed to catch the ferry from Mull to Iona. Though the ferry rocked and swayed on the water like a mother soothing her child, we made it to Iona amid high winds and a smattering of rain.

When I stepped onto the dock on Iona, I felt, all at once, peace and war within myself. The wind was literally knocked out of me, mostly because it was whipping around us at what must have been 60 mph.

However, I was standing on sacred ground—a mere mortal come to this beautiful place and granted permission to stay. Iona is wild and green; magic curls around the tendrils of grasses and leaks from between craggy rocks. I smelled the sharp tang of salted air and heard thunderclaps. The slap of water on the dock was a faint but fierce melody—a war-cry of sorts, daring all the bold souls who travel here to defy the will of nature in a continuous show of bravery.

When our group chose separate paths, I began to wander in no known direction with no known destination. The stone abbey loomed in the distance, but I chose the opposite way and began to hike.

Wind stung my eyes, plucked the breath from my lungs, and whipped my hair in violent tumult, but still I walked. Toward what, I didn’t know. It was as if Iona challenged me to resist her. I felt reverent and removed from the world, locked into a battle of wills with this wild ancient goddess who had chosen to present herself as an island.

She was making me anew, teaching me to find that breath of wildness and ancient magic I had long buried. I wanted desperately to trek through the bracken depths to find this wild woman I had been missing. Iona was forcing me to remember what wild creature I was before I’d had the chance to forget. Some part of me was yearning to break free, to be stripped bare, unshackled, to run screaming toward the green depths, wind-whipped, salt-stung, and lathered with the sweat of a thousand wild dreams—to bother not with rational thought.

It was this woman Iona preferred to see, and so Iona directly challenged the poised, well-bred face I presented to the world. I felt her challenge as I hiked without direction or destination. Iona would see to it that I be reborn into some shadow of a wild, green Celtic goddess, or maybe just a less obedient version of myself. As I made my way to a place of peace within myself, I physically ended my journey at Tor un Abba, or The Hill of the Abbot.

Supposedly this was the spot where St. Columba preached to his followers, and I stood in front of it at an impasse. Iona had awakened an ancient need within me to become something older than religion, older than civilization, and older than everything but nature itself. St. Columba had attempted to tame that ancient wildness, and was only moderately successful.

While I stood looking upon the spot where he preached, I began to wonder if instead of his taming the island, she instead decided to tame him. A sense of private irony hung in the air upon this realization— either that or it was the smell of a sea-salted storm approaching.

As I shuffled my way back to the ferry, I stopped to gently ask Iona permission to have a stone from the beach. She granted my request in return for my promise to remain wild and a little magic-filled, just as she had taught me.

For that, I am grateful.

Devon Anne Farmer is a highly irreverent (and highly irrelevant) so-and-so who lives in Nashville, Tennessee. She likes cats, frequent flier miles, and pays too much for coffee. She can be found here on Instagram.

One thought on “Remain Wild and Magical”