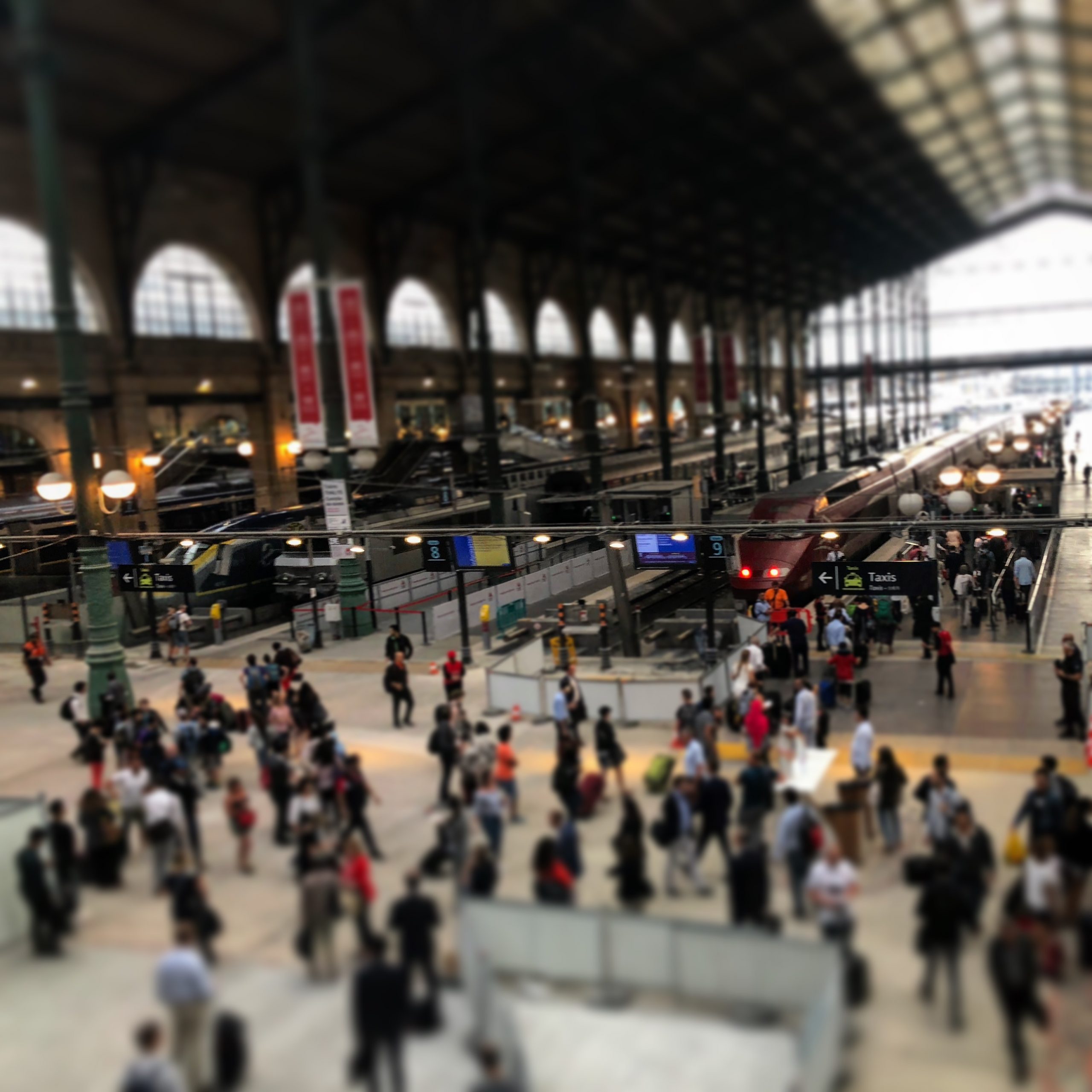 One recent Friday, Kori Winter, an American who has by now lived half her life in southeast London, was so struck by just how beautiful and fascinating her normal commute is that she made note of it. As a result, we all get to step inside this little slice of London life, and with Kori, we find hope there.

I’m on the way home from work, amongst the usual crowd in the front carriage of the DLR (Docklands Light Railway): bankers and builders (mostly white, I think British), a healthy smattering of tourists and foreign students (German, French, Chinese, Korean), and other faces and bodies of every shape and color. We have just passed Elverson Road; the next stop, end of this line, is Lewisham.

I get off the train, and while clocking out with my travel card, I notice someone else is extending her arm toward the pad at the same time: A young black woman and I smile at each other, simultaneously saying “go ahead” as we each stop ourselves, then share a brief giggle, feeling the pressure of a dozen other people waiting to clock out. We all walk up the ramp together, a swarm of commuters.

At the station exit is an apparently observant Muslim in his 30s, the man who hands me an Evening Standard each day after work. He tucks Friday magazines neatly inside as he folds copies of the free paper to hand to commuters. I usually reach out to accept one from him with eye contact and a sincere “Thank you.” Nowadays he sees me coming and kindly has a paper ready for me as I approach.

Twenty meters behind him is a man playing Irish fiddle. I haven’t seen him before, but I enjoy the music, which attracts my attention to the left while I walk to the right. I notice and savor the fact that the musician is surrounded at the bus stop by a mixture of, from what I can tell, British, West Africans, East Africans, Eastern Europeans, East Asians, and South Asians.

I start to think about how many different types of people I have moved amongst in the past five minutes, and how bored or deficient I might feel if I went to live in a place unlike this one. I grew up in mostly-white American suburbs. Those days were happy for me, and I don’t thrive with the noise and hardness of city life—but the ethnic diversity here almost compensates for my craving for more rural places. My eyes and heart and mind have gradually been opening.

As I continue home, I watch an old black man at the crosswalk shepherding young (grand?)children gingerly across the busy street. A few hardcore cyclists (all white in this instance: three men, one woman) wait for the green bike signal while we pedestrians (though I am sometimes one of the cyclists) wait for the “walk” symbol. Next to me is a pair of young Middle Eastern women in hijab, chatting gently but pausing to smile as I join them to wait.

The Chinese (I think) girl skateboarding down the sidewalk looks rather cool, and I admire her—I always wanted to learn to skate but didn’t. A white British man with his tall brown greyhound is outside the corner store. I’m guessing they rescued each other.

A young Sikh man is at the checkout of the shop where I pause to buy, literally, bread and butter. He is calm, polite, and new to me. The Nigerian woman with whom I normally trade quips about our similarly-aged children is not here today, nor is the young Brit of Caribbean parentage (he’s very young, but he is the one who is best at ringing up the heavy items first so they can be put in the bottom of the shopping bag in order)—they are both lovely people to encounter every other day or so on the way home from work. I also exchange a hello with the pale, red-haired girl at the next till. She’s relatively new but I go to this shop a lot so we kind of recognize each other already.

Then out I go, passing by the after-school tutoring center where children of every color are meeting their parents at pickup time, which today also happens to be almost dusk. It’s a nice scene. I am really noticing diversity at this moment, and I think, “If I write this all down to share, some people will think I’m making it up!” But I get out my phone anyway and type a list of the people I’ve seen just on my walk from the station.

Suddenly a calico cat jumps down over the wall, down to the sidewalk right in front of me—a surprise I share with a young woman (of some blended heritage I won’t presume to know) walking the opposite direction: “Oh!” we both say, and smile at each other in a tiny instant of shared experience as the cat wanders over to the building site from which I’ve been hearing Eastern European languages as well as English for the past few months.

Now I am across the street from my house, and I exchange neighborly hellos with an old white man at the crossing and wave back to the Jamaican man who lives on the corner. I walk past a multicolored gaggle of school kids coming out from the school nearby, and see the black and white cat from next door (where lives an older Irish-English woman) get up to wind around my legs as I approach.

After stroking the cat, I go in the front door and am greeted by the wagging Staffy-Lurcher dog we adopted a year ago (who used to chase that black and white cat from next door but has now been trained not to).

In my front room—which is filled with Victorian English artifacts, 19th-century American ceramics, Native American baskets and pots, an African batik purchased 20 years ago and still a favorite, an Indian rug, unmatched comfy chairs, and too many books and video games—I find my (rather privileged but semi-woke) white British-American sons declaring they’ve done their chores and homework and have “just” settled down to play a video game.

Aside from their undeniable but unavoidable predilection for screen/device usage, I have hope that the next generation(s), at least around here, will be (closer to) fine. My sons and their peers are exposed every day to different languages, ethnicities, and amounts of melanin at school, home, and work. More and more of their parents are waking up and trying to raise them to both respect and normalize this variety. May it be so, anyway.

Though she's now been a teacher of literacy and ESOL (English for Speakers of Other Languages) for over two decades, Kori Winter had acute culture shock when her nine-year-old self moved with her family from Denver to Chicago. She never really recovered and hastened back to Colorado for sunshine and university. There she studied English, French, environmental studies, and sociology. In 1995 she volunteered to work with runaway children in London and fell in love at first sight with a long-haired man on a bicycle. She married him the following year and remains in southeast London with her husband (who now has short hair) and two teenage sons (who have long hair). Kori’s hair is starting to go grey, and she’s okay with that—but she still misses sunshine and mountains.