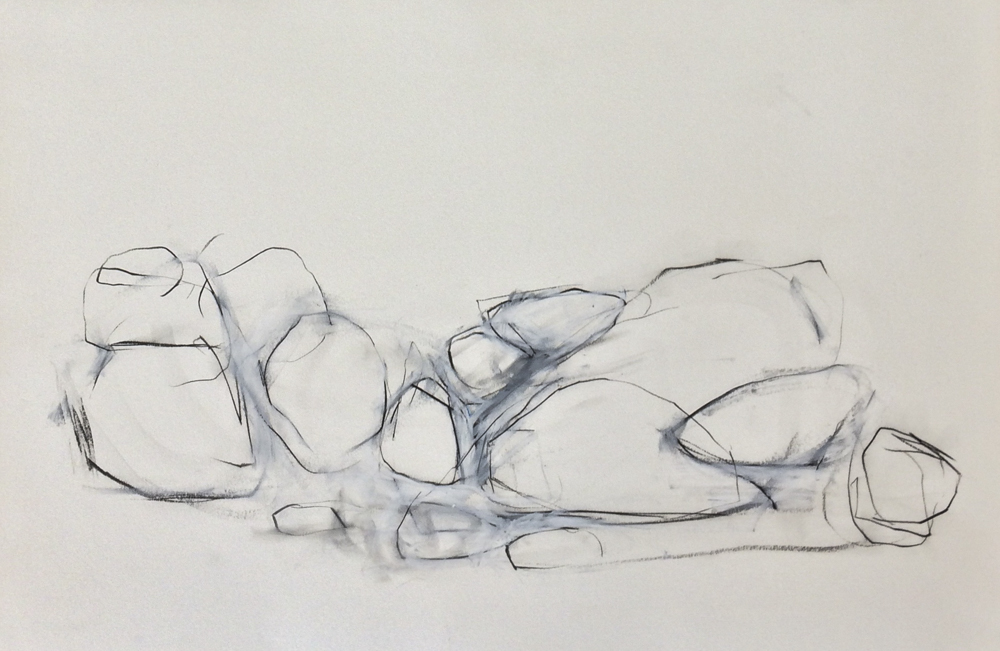 MADE: A series of conversations with artists about how they navigate impasses and discover breakthroughs in their work. Read the rest of the series here.

To reach Karen Dolmanisth’s studio, I must first navigate a series of stairs, metal doors, and maze-like corridors in an old mill building in Florence, Massachusetts. Then follows a tunnel of books, artwork, costumes, and other ephemera gathered and carefully placed over the twenty years she has worked in this space.

Each time, upon really entering her domain, I am struck by the quality of light, which streams through three full walls of multi-paned factory windows, bathing the room in sudden brightness, even on a dull day, and gradually bleaching the color from most items, until the entire palette is reminiscent of one of Georgia O’Keefe’s desert paintings.

A generally solitary soul, Karen greets me with a warm embrace and torrent of ideas, impressions, and accounts from her reading, giving me the impression she hasn’t spoken to anyone in a very long time. I’m eager to talk, too, given the sense of affinity I feel with her work and her process, with its rare depth of practice, imagination, and skill. We talk about the spiritual dimension of artistic practice, its relationship to ritual, our mutual admiration of Helen Frankenthaler, Zen forms, Yoko Ono, and John Cage.

Meanwhile, I try to take in the walls, tabletops, and bookshelves, which brim with beautiful stones, interesting glass objects, photographs, sketches, drawings, paintings, and sculptures from found materials. If I could, I’d spend a week here, alone, exploring each corner thoroughly. I’d comb through her philosophy texts, books on Alexander Calder, Sally Mann, Joan Mitchell, Marina Abramović, Andy Goldsworthy, and other 20th century luminaries. I’d go through the myriad clippings describing past projects, and I’d receive a very good education as a result.

During our conversations, Karen often refers to her decades-long study of Jung and her abiding interest in the unconscious. This has equipped her with a way of thinking about the source of her work and ideas that eventually leads our conversation into the territory of the archetypal feminine, giving us a chance to compare notes on the role of the feminine in our work, especially in the wake of the recent election which has made both of us feel as though we are trying to exist in ever more hostile conditions—what with the threats to arts funding and education, much less the very idea of art.

Although she completed a Master of Fine Arts in sculpture, new media, and installation from the University of Massachusetts, with time spent at Parsons School of Design studying semiotics and film, among other things, she is an autodidact of the highest order who spends long hours every week pursuing her interests in abstract art, psychology, and religion. You simply don’t find such serious readers nearly enough these days.

Karen’s relationship with what she readsinfuses her work and being in a way that far exceeds any academic understanding, although she feels that her own ability with language is either “too coarse, or else too esoteric” to communicate who she is and what she means. But her language, as I see it, is a combination of physical movement, organic materials, and a lifetime of a disciplined studio practice.

Over the last six months I’ve visited Karen every month or so to talk, share accounts of what it’s like to be self-supporting artists unaffiliated with institutions at this point in our careers, and to check in on a collaborative work-in-progress entitled Each Little Thing. The catalyst for this collaborative work was an invitation for the two of us to show work at The Provincial, a beautiful artist-run project space in Chief, Michigan, hosted by artist Melanie Parke.

Our response to this opportunity began with my book-length series of poetic fragments. Entitled In Mountains, it depicts a day in the mountains that is also an internal journey in which the female speaker returns to a granite and windblown landscape in order to “feel something I used to feel.”

I left my writing with Karen, and when I returned a month or so later, I found a studio full of sketches, of a sort, done while reading and hiking in the Berkshire Mountains near where we both currently live. There were other things in progress, too: large-scale gesture drawings, ink paintings, willow branches stripped for use in sculptures, and sketches of river rocks. All of this interested me, but what really intrigued me were several pieces involving rice paper and calligraphy, because she was working from pages torn from a very old ledger from Japan, pressed plants, and tape, which Karen had assembled as spontaneous accounts of her experience on the trail.

Karen describes herself as a process artist and has a long history of doing site-specific installation work with local and gathered materials, usually on a very large scale, so she didn’t necessarily regard these trail pages as finished works, although I insisted that others would enjoy seeing them as much as I do.

My favorite piece from this series shows a slender weed of some kind, whose very fine roots have scattered soil across the paper. This scattered soil had been preserved by the clear tape used to affix the material to the page en route. “Something got in there that is more important than me. It’s an attempt to get out of the way and yet still be the hand that does the work. It’s not trying to illustrate how great I can paint or draw or how many thousands of hours I have [put] into this practice. I can make a mark to mark that moment on the trail. It’s not just some pieces of fern . . . I’m trying to say all.”

As delicate utterances, these marks and remnants record private moments, rituals, illuminations, and the process of becoming present to the sacredness among the small things of this world, especially as experienced while walking.

As I left Karen’s studio after my most recent visit, I encountered another artist on the stairway who said that she’s known Karen for twenty years. She praised Karen’s determination to stick with it all this time, despite all the ways being an artist has been hard for her—as a single mother and, it has to be said, as a female—although she is one of the great talents of her generation. As we left the mill building together, the woman called toward me to say: “It’s like we are the last of our kind who are left.”

This sentiment echoed a conversation I’d had with Karen several months earlier, in which she said, in response to my being impressed at her ability to maintain such a beautiful studio, even when at times she has lacked her own home to return to at night: “There’s a strand of DNA in me that won’t let me give up.”

The resulting works on view at The Provincial are an intimate glimpse of how two women artists collaborated, through conversation, experimentation, and the exchange of materials and resources, to make something in this moment, reflected mostly by Karen’s drawings and a smattering of my words, which were used as titles.

What I appreciate about this body of work-in-progress by Karen Dolmanisth is the utter sincerity of it, dare I say, the truth of it. No pyroctechnics. No grand gestures. Nothing to prove. I admire her willingness to let it be what it is, rather than a display of a particular, understandable, and widely recognizable kind of virtuosity. The art that reaches me fastest often does so via this route because it is unmediated by public opinion, self-consciousness, or concerns about one’s public name or reputation.

“I’m wanting to make a beyond-words gesture that says: from this place, I know that which is greater,” explains Karen. “It’s a ritual. A sacred act, like touching the cave wall. These pieces are saying: I know this to be true,” and by this she means, each little thing. All of the little things that make up this world, and enter her imaginative awareness, and leave their mark on her as she makes her mark in the various ways that she does, which includes some that are ephemeral, or even invisible to others, the way most of the artistic process is to an average viewer in a gallery or museum

Holly Wren Spaulding is an interdisciplinary artist, teacher, and author, most recently, of Familiars: Poems (Alice Greene & Co., 2020). Holly is the founder and director of Poetry Forge, where she works with emerging writers to develop new work and complete books.

One thought on “MADE: Karen Dolmanisth’s Big Little Things”