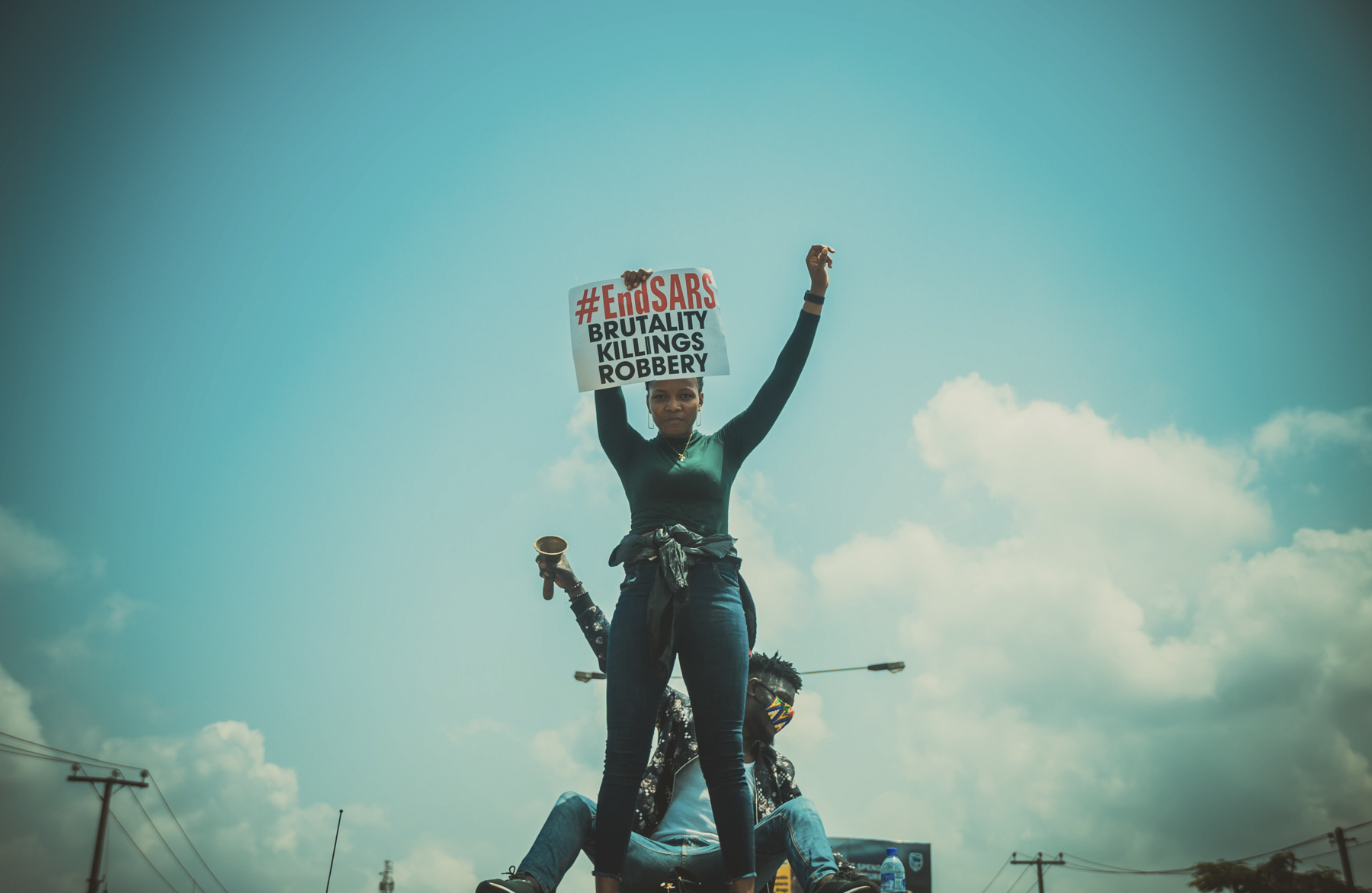 October’s civic action in Nigeria calls for an end to a Nigerian form of police brutality targeting young people. While our recent View From a Pandemic story about protests during the pandemic highlighted the way protests against police violence transcend national boundaries, this story zooms in for a closer look at details that make global stories unique at the local level. Our contributors in Nigeria help us understand the specifics of the call for change, as they stood on October 14, and why, no matter how similar the images may appear, each call for local action is its own chapter within humanity’s global story.

A different kind of SARS is killing Nigerians, especially its young population, and the citizens are protesting for it to end.

While SARS could be mistaken by non-Nigerians for the contagious respiratory illness caused by a coronavirus and first reported in Asia in 2003, in Nigeria it is the acronym for the Special Anti-Robbery Squad, a brutal division under the Nigerian Police’s Force Criminal Investigation and Intelligence Department.

The police unit was founded in 1992 by former police commissioner Simeon Danladi Midenda following the death of an officer. The unit was originally meant to intervene in high-risk operations like robbery and kidnapping.

But it has deviated from its course and morphed into a terror factor for the Nigerian populace, becoming notorious for extortion, framing suspects, and even blackmail and sexual harassment.

Reportedly, more evidence exists of SARS killing and harassing citizens than of it doing its job.

In 2019, Kolade Johnson was shot by officers with the anti-cultism police unit during a raid in Lagos, according to a statement from the Nigerian Police Force. Johnson’s death then sparked demands for SARS to be reformed.

SARS is just one arm of a system that has oppressed Nigerians for years. Victory over SARS means victory over systemic issues that include bad governance.

Amnesty International documented 82 cases of torture, ill treatment, and extra-judicial execution by the unit between January 2017 and May 2020. Another media organization, The Cable, reported 92 Nigerians killed by SARS in one year and justice delayed for victims.

According to Amnesty International, SARS targets money and property in their criminal activities as they regularly demand bribes and steal and extort money from criminal suspects and their families.

More so, they also target young persons. Some youths have argued that to be a young person in Nigeria today means to constantly live in fear of being harassed and molested by SARS or have your phones searched without warrant.

Wearing dreadlocks or tinting your hair puts you on the arrest and extortion list of SARS. Young persons between the ages of 17 and 30 are at the most risk of arrest, torture, or extortion by the police unit for owning laptops and iPhones.

About 20 youths who were interviewed in the Amnesty International report said SARS officers often look out for well-dressed young men, especially those in new cars. Often, these young men are accosted at roadblocks or on the streets and accused of being internet fraudsters, known as “Yahoo boys” in local parlance.

The young men are taken to the station and threatened with being charged for robbery, unless they agree to pay large sums of money for bail.

“These guys are real demons,” a victim in Lagos reported on Twitter. “Seeing that we weren’t about to give them that money they ended up bringing it down to N100,000, and they drove us to Zenith Bank along Osolo way, opposite SOS home, where they made my guy get down from the bus to withdraw the money from the ATM. After they got the money, they let us go.”

Women have played a crucial role since the protest began, both physically and behind the scenes. Feminist groups known as the Feminist Coalition have raised funds to sustain the protest.

Some protesters pose for a photo.

Stories of the menace of SARS with video evidence are pervasive online, and youths live in constant fear of being picked up or framed for a crime.

The fresh public outburst in Nigeria was sparked by the recent killing of a young man in Delta State on October 3. A video appeared on social media showing a SARS team allegedly shooting and killing the young man.

According to reports, the incident was said to have occurred in front of Wetland Hotel in Ughelli in Delta State. Trending heavily on social media, the footage shows the officers speeding off in the victim’s vehicle, a white Lexus SUV.

Eyewitness accounts said the police operatives stole the victim’s car after they killed him. This incident sparked wide outrage nationwide with residents recounting ugly encounters with SARS and calling on social media for outright disbandment of the unit.

This became the tipping point for Nigerians who began an online protest before taking to the streets to drive home their point in protests simultaneously across major cities in the country.

Governor Sanwo-Olu, of Lagos State, is forced to join the protest in solidarity.

Ten people have reportedly died from the protest, which has lasted for weeks, due to the use of live ammunition by police officers in dispersing protesters.

As the protests raged on, Mohammed Adamu, the inspector general of police, announced a ban on patrol by SARS and on other unauthorized undertakings. But this was rejected by Nigerians who crave a complete dissolution of the unit and more so because similar pronouncements have been made in the past.

The Nigerian government had in 2015, 2016, 2017, 2018, and 2019 promised to address police brutality and impunity by “reforming” and “reorganizing” SARS, but they have failed to do so, allowing the evil deeds of the notorious unit to go on for years.

“This is not the first time we have heard of a directive being issued that SARS officials are not allowed to do searches anymore; they are not allowed to harass. But they still continue killing us. What is our guarantee that this issue will stop?” said Folarin Falana, a Nigerian rapper, songwriter, and actor known as Falz.

The current protest, championed by youths, could be seen as revolutionary. Nigerians have been too afraid to exercise their human rights by protesting, due to a repressive government run by President Muhammadu Buhari, an ex-military dictator.

With one theme, “#EndSARS,” driving the protest, the public is unwilling to back down this time—no matter the cost.

SARS is contributing to the terror and insecurity the country is already experiencing by the Boko Haram bandits in the north.

“We want them to just end the whole thing. They said they are protecting us, how? We can’t drive nice cars anymore. We can’t wear nice clothes because we are scared of our fellow men killing us. If you can end this SARS, we’re good,” visibly upset social media influencer Pamilerin Adegoke told BusinessDay, a Nigerian newspaper.

The protests against SARS, which also spread to different parts of the world—Toronto, the UK, UAE, US, and others—where Nigerians live, forced Adamu, the inspector general, to bow to the outcry of Nigerians and announce the disbandment of SARS on October 11.

But given the numerous antecedents of failed promises, the protests may continue. Though the unit has been disbanded, there are five more requests keeping the youths in the streets. They include:

They are also asking President Buhari to give an executive order to the disbandment of SARS.

As of October 14, a Special Weapons and Tactics division has been established to replace SARS. All officers of the defunct SARS have been asked to report to force headquarters in Abuja for debriefing, psychological and medical examination, retraining, and, afterwards, redeployment.

The salaries of police officers have yet to be addressed, and the public may continue their outcry against the newly-formed SWAT because chances are high that this force will be composed of the same officers who were part of SARS.

A youth protests on the roof of a LASTMA traffic warden stand. LASTMA (Lagos State Traffic Management Authority) is a security outfit in Lagos State responsible for traffic matters.

Vick Jesam is a journalist based in Lagos, Nigeria.