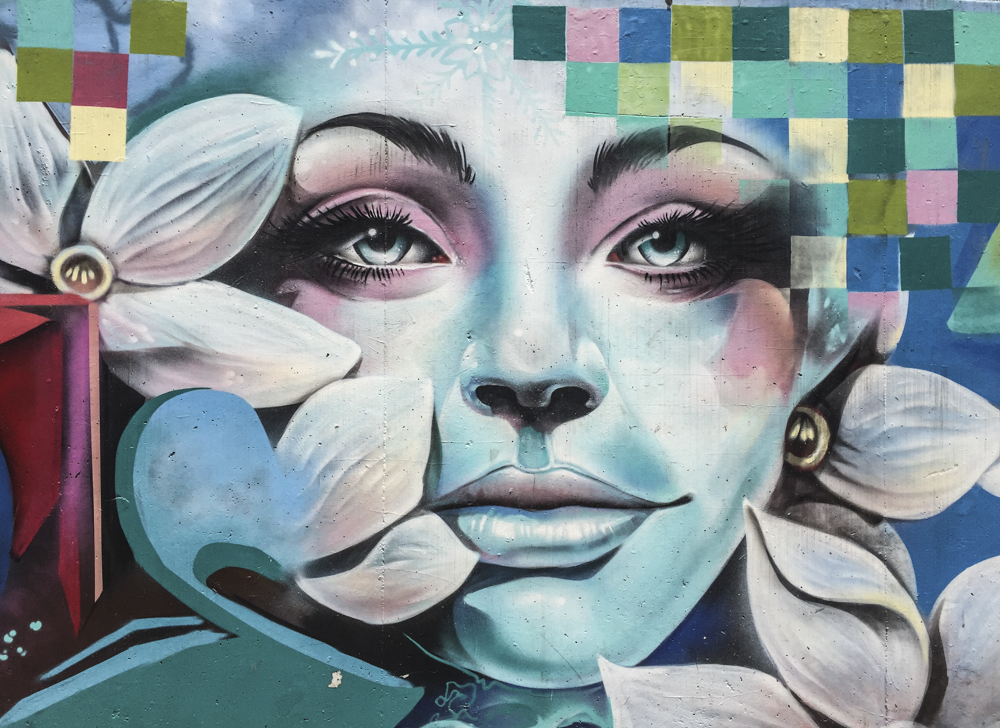 A graffiti mural representing peace, at the entrance to the Comuna 13 / Independencia neighborhood. Now full of graffiti murals like this one, the neighborhood has made a comeback after drug and turf wars devastated the area.

STORY AND PHOTOS BY MEGAN FINCK AND MIKE PLUNKETT

During a long-anticipated sabbatical in Medellín, Colombia, that took them deeper into this foreign-to-them culture than life as a tourist allows for, experienced travelers Mike and Megan discovered the secret crevices where the triggers of culture shock hide in plain sight. And then they had a choice to make.

A graffiti mural representing peace, at the entrance to the Comuna 13 / Independencia neighborhood. Now full of graffiti murals like this one, the neighborhood has made a comeback after drug and turf wars devastated the area.

“I just want my cheesecake to taste like cheesecake!”

Megan, in tears, lamented our dessert as we sat at the dinner table in our Airbnb in Medellín, Colombia, a converted attic that at first blush was an apartment.

A bathroom, bedroom, and kitchen were present, as was furniture, a portrait of Jesus the Good Shepherd above the bed, and a portrait of a naked woman near the front window.

Yet the false walls of the bedroom didn’t reach the top of the ceiling. Exposed PVC pipes constituted our bathroom “plumbing.” Our kitchen was a refrigerator that took several slams to close, a toaster oven, and an auxiliary electric stove with two eyes.

The furniture was rock hard, as was the bed, which we’re told is customary with Colombian furniture. We asked for a softer pillow top. Our host provided a secondary mattress that made the bed a bit too soft, but better still than the alternative. The portrait of Jesus was true to life, as much as we could tell.

This was just like an apartment in which we resided in the United States.

The cheesecake we had sampled, an assortment of chocolate, New York Style, and strawberry slices, was just like cheesecake one would eat and enjoy in the States.

THE SAME BUT DIFFERENT

By this point, we were a few weeks into a long-planned sabbatical in Colombia. Medellín is a city on the rise. After decades of conflict—la violencia—and numerous government operations to clear out the guerrillas, Medellín finally stabilized. Its appeal is apparent upon arrival: incredible weather, sound infrastructure, and nice people.

Because of its relationship with the United States in fighting the war on drugs, Colombian culture mirrors our home culture in many ways. Paisas (the name for native Colombians from Antioquia, the department in which Medellín is located) wear emblems of U.S. ideals on their shirts—literally. Walk down any street and one sees clothing with slogans and ideas in English. Do the owners of said clothing know what their shirt says? Probablemente no.

Paisas also stream U.S. culture from their radios—Bruno Mars and a fondness for Ray Parker Jr.’s “Ghostbusters” abound. And there is no shortage of American brands filling storefronts and shelves (Dunkin Donuts, Starbucks, Dominos, Heinz, Kraft, and Hellmann’s, to name a few).

But Medellín is, at the same time, different and wholly other. Medellín’s familiarity and “Western-ness” draw you in, while its subtle differences can throw you off.

For example, McDonald’s is a prime locale for a first date. Not because of lack of funds but because, well, we’re still not sure why. But the fast food chain is held in higher esteem in Colombia than in the States.

One translation for tortilla chips is nachos, so if you order “nachos,” you’ll be served simply a bowl of chips, possibly with a side of carne, queso, aguacate y frijoles.

The car makers are the same: Dodge, Chevy, Mazda, and Renault, but the models are unfamiliar.

It’s rude and improper to slam car doors, but not because of anything to do with one’s temper. Rather, cars in Colombia are lighter and thinner, so the booming sound of a slammed door reverberates.

(Or maybe not. Others say not to slam the door because the cars aren’t well-made, and they’re afraid the door will fall off. Or maybe it’s purely preference.)

In the international aisle at the Jumbo shopping center, the “American” section is stacked top-to-bottom with cans of Old Bay seasoning.

And dios mío, those dairy products. Nothing tastes quite the same as one expects. It can’t be explained but something is off. Friends have suggested this may be the result of differences in pasteurization processes. Whatever it is, cheesecake it is not.

In that moment of finishing our dessert, we hit the wall that most know as culture shock. But for us the shock felt different because it was the similar—rather than the wholly other—that triggered it.

We have discovered that it’s often these subtleties that most surprise and sometimes break you: the almost but not quite. The dessert or dish that looks good and tricks you into thinking it will taste like home. Then you take a bite. It is not bad, but it is not what you expected.

When something teases familiarity yet proves foreign, you are reminded that you are in fact far from home.

Confronted by the jarring aspect of change, most people seek the similar and cling to comfort. For us, that usually involves coffee, craft beer, long walk-and-talk sessions, and sweat-it-out sessions at the gym. Thanks to technological advances since we both studied abroad back in the early 2000s, we’re easily able to keep up with U.S. news and catch up with family and friends back home via video chat.

Ironically, but perhaps not surprisingly, we had traveled to another country and another context and recreated a life that was nearly identical to what we had left behind.

And if we kept going in that direction, that was going to be sum of our time in Medellín.

Until we decided it wasn’t.

As small and nuanced as the differences in Colombia appeared, we wanted the differences. We engaged with paisas and sought to understand why so many called Medellín the miracle city. What we saw as a functional, welcoming city was the result of intentional work by citizens and politicians who now are seeing the hard-earned fruits of years of labor.

The country is in the midst of a coffee renaissance. After decades of exporting the best quality beans and only drinking the “second-class” coffee, Colombians are now starting to enjoy the best coffee for themselves. New businesses are sprouting up in Medellín, many of which are started by millennial paisas who want to forge their own way.

The history of Medellín is well-known to many because of Narcos on Netflix, and yes, the past of drug cartels and Pablo Escobar is never far from people’s minds. But what is on the forefront of the minds and hearts of paisas is this: Cambio es posible. Change is possible.

To be sure, our life in Medellín didn’t dramatically change after the cheesecake incident. We still loved drinking coffee—though perhaps even more now—and still enjoyed Medellín’s fledgling craft brew scene and sweaty sessions at the gym, where the instructors act like DJs “spinning” the hits instead of teachers leading the ride. But what did change was our perspective.

Eventually, we found a new apartment, with real bathroom plumbing, landscape portraits, and a view of the city that made it hard to leave.

The day we came to visit the new place, we found a bakery nearby. Ordering water, we noticed they had cheesecake.

Wary and driven by hunger pains, we ordered a slice. Taking a bite, we looked at each other.

“Still not quite what we know, but it’s the best we’ve had here,” Megan said.

Instead of shock, we felt gratitude.

Megan Finck and Mike Plunkett spent the latter part of 2017 in Medellín, Colombia, as part of their “grown-up study abroad.” In lieu of a final exam, there were lots of quizzes about Colombian coffee and the fledgling craft beer scene.

Before Medellín, Mike and Megan spent more than a decade in Washington, D.C. Mike is a journalist and designer who has written for The Washington Post, among other publications. Megan's background is in program management, specializing in international education and event planning.

Evidence of their handiwork in Colombia can be found on Instagram @megan_finck.